Magnificent and impressive ruined castle of the Gordon family 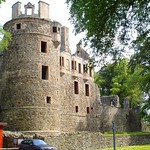 Built over previous castle around 1190, but it was strongly fortified from around the 14th century by the Gordon family. The house was lived in right the way through the ages until the Jacobite period where it became a quarry before being preserved.

The castle is now managed by Historic Scotland after leaving the Gordon family in 1923.

This is an extremely interesting example of the scottish castle with a violent and dramatic history well worth reading.

Huntly is on the rail line from Aberdeen to Inverness with 15 min walk from the station to the castle.