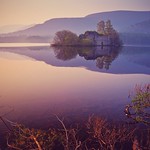 This ruined 15th century castle is said to have been the property of Alexander Stewart who was known as "The Wolf of Badenoch" which gives you some idea of his character! The castle was besieged in 1690 by the Jacobites.

The island was once connected to the mainland by a causeway but this was flooded when the loch level was raised in the 8th century.

There is a walk all around the Loch whcih gives lovely views of the Castle which is otherwise inaccessible to visitors.