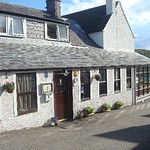 Evening meals are served in the An Garbh Restaurant (roughly translated as 'hilly area'), which has big picture windows overlooking the sights - including Ben Loyal, Ben Hope and the ruins of Castle Varrich. The kitchen taps into supplies of local produce, with Tongue oysters topping the bill. Otherwise, expect Cullen skink, a duo of haggis and black pudding coated in oatmeal, and venison with plum and juniper compote. Desserts range from banana and marshmallow crêpes to sticky toffee pudding.

The full menu is also available at lunchtime in the Bistro Bar, along with sandwiches, paninis, jacket potatoes and other light bites. Traditional roast lunches are the stars on Sundays.

http://www.benloyal.co.uk/#!location2/c1ytr
This email address is being protected from spambots. You need JavaScript enabled to view it.
0.0/10 rating (0 votes)
Modification Date Wednesday, 20 January 2016