Edinburgh is blessed with many magnificent green, open spaces, and none better than Holyrood Park (Queen's Park). The park's main feature, and the city's main landmark, is Arthur's Seat, the igneous core of another extinct volcano, and the highest of Edinburgh's hills (822ft). 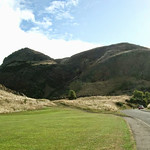 Edinburgh is blessed with many magnificent green, open spaces, and none better than Holyrood Park (Queen's Park) – a 650-acre rugged wilderness of mountains, crags, lochs, moorland, marshes, fields and glens – all within walking distance of the city centre. This is one of the city's greatest assets, and it's easy to wander around till you're lost from the eyes and ears of civilization.

The park's main feature, and the city's main landmark, is Arthur's Seat, the igneous core of another extinct volcano, and the highest of Edinburgh's hills (822ft). It is probably named after Arthur, Prince of Strathclyde, rather than King Arthur of legend, as many believe. Another dominating feature of the Edinburgh skyline is the precipitous Salisbury Crags , lying directly opposite the south gates of the palace. The best walk in the city is to the summit of Arthur's Seat, from where you get the very best view of the city, as well as the Pentland Hills to the south, the Firth of Forth and of Fife to the north, and, on a clear day, to the Highland peaks, 70 or 80 miles away. The walk to the top is a popular one, and easier than it looks. If you want to avoid the crowds during summer, then make an early start before breakfast and watch the sun rise over East Lothian.

There are several different routes, all of which take less than an hour, but a good circular walk that takes in the wilder bits and the lochs, starts from St Margaret's Loch, little more than an artificial pond, at the far end of the park from the palace. To reach the loch, follow Queen's Drive east (left) from the palace for about two-thirds of a mile (1 km) and it's on the right. Leave the car park beside the loch and head around the loch up towards the 15th-century ruin of St Anthony's Chapel. Pass the ruined chapel on your right and after a few hundred yards you'll see the main summit towering above you on the right. Keeping the summit to your right, climb over a saddle which joins the path up from Dunsapie Loch, which you can see below you on the left, and continue up a rocky path to the top. Dunsapie Loch is overshadowed by Dunsapie Hill, which makes a great place for an evening picnic and from here it's an easy drop down to Duddingston Village, just outside the park boundary, and one of the most attractive and unspoilt of the old villages that have become part of the city suburbs. The village Kirk dates back to the 12th century and the Sheep Heid Inn is a great place to stop off for some liquid sustenance and a bite to eat. Adjoining the village, on the south side of Arthur's Seat, is Duddingston Loch, the largest of the park's lochs, which is a sanctuary for waterfowl. It can also be reached via Queen's Drive, heading right from the palace for about four miles.

There are other routes to the top of Arthur's Seat. One starts opposite the palace car park and winds up by the foot of Salisbury Crags, This is the Radical Road, built in 1820 and so called because Sir Walter Scott suggested it be constructed by a group of unemployed weavers from the west, who were believed to hold radical political views. This is where James Hutton is said to have dreamt up the idea of geology by looking at the rock formations. The road traverses the ridge below the crags and continues on grass through "Hunter's Bog" and up to the summit. You can also walk along the top of the crags, though there is no path.