Massive 14th century castle near Glenlivet. It was owned by the Stewarts until it was forfeit after the 45. Ruined but some recent work has been completed to stabilise the structure 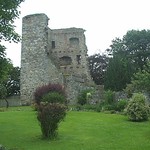 Sited as it is, on a ridge above the confluence of the Rivers Livet and Avon (pronounced A'an), the castle occupies a natural strategic site. It is likely that the present castle is constructed on the site of previous fortifications and may originally have been an Iron Age Dun. It is now a Scheduled Monument.

There is little written history on the castle and what there is can be open to interpretation. However, it is recorded that King Robert II granted the lands of Strathavon (including Drumin) to his son Alexander Stewart on the 17th July 1372.

Alexander Stewart (1342-1406), referred to as the "Wolf of Badenoch" was noted for his temper and harsh justice. He is mostly remembered for the sacking and burning of Elgin Cathedral (1390) as part of a long term feud with the Bishop of Moray. It is unlikely that he was ever in permanent residence at Drumin, the castle being held by one of his sons. He also owned the strongholds of Lochindorb and Loch-an-Eilean and would more likely be resident there.

It is thought that Sir Walter Stewart, the Wolf's Grandson, built the current castle in the late 1400's, replacing an earlier fortification. The same Sir Walter Stewart, however, disposed of  the castle and lands pertaining to Drumin in 1490, when they passed to Alexander, 3rd Earl of Huntly.

The Stewart family continued to live at Drumin and nearby Kilmaichlie, until the early 1700's when Gordon Stewart is thought to have been the last resident of the castle. It is presumed that the castle fell into disuse about this time.

The only other notable reference to the castle in the intervening period was that the Marquis of Argyll stopped there with his army before the Battle of Glenlivetin 1594.

Description of the Castle

A fortified tower house, dating from the 15th century. There are no remains of the southeast wall, most of the southwest wall and some of the northeast walls. The northwest wall has the remains of a corbelled parapet, machicollation and a bartizan at the west corner. Above the single barrel vaulted cellar was a first floor hall, second floor hall and third floor chamber and mural chamber.

There is little evidence of the roof  structure. The walls are thick and faced in coarse whin and freestone rubble in lime mortar with roughly shaped freestone dressings, pinnings and traces of harling. There are the remains of plaster on the upper window reveals and internal wall surfaces. Corbells and the remains of a fine sandstone fireplace survive at third floor level.

After extensive stabilisation work to make the castle safe, the Crown Estate, helped by the Tenants of Drumin Farm and with part funding from other organisations, have opened this Scheduled Monument to the public.

A car park has been constructed by the River Livet and a 500 metre footpath climbs through the mature trees on the slopes below the Castle into the old walled kitchen garden where you can view and gain access to the Castle itself. The walk then circles out further along the banking offering impressive views of the local area as befits such a site of strategic importance.

The car park is also sited on the route of the longer Drumin Circular Walk (approximately 2 miles), which follows the river Livet before climbing up past Glenlivet School and returning through pine and larch woodland.

Officially opened on the 14th of July 2005 by HRH Prince Andrew this is a legacy to the Late Cathy Reid of Drumin Farm who was the driving force behind the origin of the project and an enthusiastic supporter of the later developments. It is an example of commitment by the Crown Estate, partner organisations and individuals who have helped with the project over a number of years showing just what can be achieved by working in co-operation.

There are soime excellent walks from the car park that include the castle grounds so bring good shoes and enjoy the countryside.

Turn off main road at Ballindalloch and take the B9008 south and follow signs to Drumin. There take the B9136 and its on right with car park.