Massive tower house on an island which was the home of Black Douglas in the C15th until 1455. Managed by Historic Scotland and excellent example of the mediaeval castle architects art. 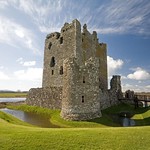 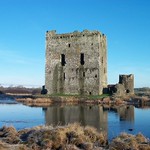 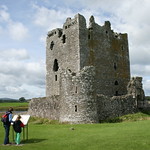 You have to cross the river by boat even today which demonstrates what an excellent and defensible position this castle occupied. Even in semi-ruinous state, it is an impressive and forbidding site. The original tower was 100 foot tall and would have been surrounded by a range of other buildings which have now gone leaving the tower in solitary splendour.

The castle was built by Archibald Douglas as his main retreat against both the English and the men of Galloway who he was pacifying. The design was innovative and represents on of the first tower houses which was in refined form to become the dominant style of Scottish castles thereafter.

A path and steep steps lead to a small boat making it unsuitable for visitors using a wheelchair. After a short boat trip, more mobile visitors can visit the ticket office and curtain wall. The castle has steep steps inside and out.

Parking available about half a mile from the boat dock. Please allow 15 minutes from the carpark to walk to the boat dock. The last boat departs at 4.30pm in summer, and at 3.30 in October.