The neoclassical Edinburgh New Town, one of the boldest schemes of civic architecture in the history of Europe, is what makes Edinburgh a truly world-class city, every bit as impressive as Paris or Prague, Rome or Vienna. 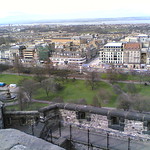 Built in a great burst of creativity between 1767 and 1840, it was the product of the Scottish Enlightenment. Even today, it is still inconceivable how, in the words of one historian, "a small, crowded, almost medieval town, the capital of a comparatively poor country, expanded in a short space of time, without foreign advice or foreign assistance, so as to become one of the enduringly beautiful cities of western Europe."

The New Town was essentially conceived by Edinburgh's forceful Lord Provost (Lord Mayor), George Drummond, who wanted his city to be a tribute to the Hanoverian-ruled United Kingdom, which he had helped create. His plan was to extend the city northwards onto a rectangular plateau known as Barefoot Parks, on the far side of the Nor' Loch (north loch) under the Castle Rock. Work began on draining the loch in 1759, to make way for Princes Street Gardens, and, five years later, construction began on the North Bridge, which would give access to the New Town. The following year a competition was announced for the plans and the winner was an unknown 22-year-old architect, James Craig. His design symbolized the union of Scotland and England, reflected in many of the street names. The grand central thoroughfare of the First New Town, as the area came to be known, is George Street, named in honour of the king. It links two great civic squares, St Andrew in the east and St George's (later to become Charlotte) in the west. On either side of George Street, and running parallel to it, are two long lanes, Thistle Street and Rose Street, symbolizing the national emblems of the two countries. Traversing George Street are Hanover Street and Frederick Street.

The grid-iron pattern is a model of unity, simplicity and regularity, but its overriding success is the use made of the available space. Princes Street and Queen Street are both singles terraces, facing respectively south to the Castle and north towards the Firth of Forth. The beautiful symmetry of the plan and great views on offer were exploited fully by architect Robert Adam, who contributed greatly to the later phases of the work with many elegant neoclassical buildings. The speed with which the New Town was built is astonishing, considering the quality of the building. By the end of the century most of George Street, Castle Street, Frederick Street and Princes Street was in place as well as Register House, the north side of Charlotte Square, the Assembly Rooms and Music Hall, and St Andrew's Church.