Tweet
Ancient abbey that saw so much early Scottish history and remains even in ruin, very beautiful. 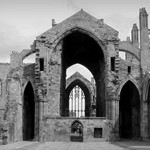 The bitter wars that ravaged the Scottish borders for centuries did irrevocable damage to Melrose Abbey, but even in ruins it remains toweringly beautiful and impressive. It was founded in 1136 by the prolific David I (who helped to found all four of the great Border Abbeys) and was the first Cistercian monastery in Scotland. It was attacked in 1322 by Edward II, but soon restored thanks to the financial assistance of Robert the Bruce. In 1385 it was largely destroyed by Richard II of England, then completely rebuilt, only to be ravaged again, this time by Henry VIII, in the mid-16th century. The abbey as it stands today dates from the 14th and 15th centuries, and was preserved by the money of the Duke of Buccleuch and the energy and talent of Sir Walter Scott. His great narrative poem The Lay of the Last Minstrel painted an eloquent picture of the abbey and helped him on the road to fame.

The red sandstone ruins show an elaborate Gothic style and some of the finest figure sculpture in Scotland. Of particular note are the humorous gargoyles, which include a pig playing the bagpipes on the roof of the south side of the nave. The abbey's real claim to fame is that the heart of Robert the Bruce was buried here, at his request, after it had been taken to the Holy Land to help in the Crusades. The lead casket believed to contain the heart was finally excavated in 1996 and now takes pride of place in the abbey museum, in the Commendator's House, next to the church. Info: Apr-Sep daily 0930-1830; Oct-Mar Mon-Sat 0930-1630, Sun 1400-1630. £3.30, £2.50 concession. Tel 822562 (HS).