The Abbey on Iona

Tweet
One of the great sacred shrines in Scotland and a magnet for pilgrims. You dont have to be religious to truly enjoy this wonderful island. 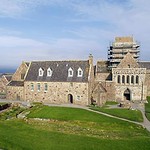 The present abbey dates from around 1200, though it has been rebuilt over the centuries and completely restored in the 20th century. The oldest part is the restored St Oran's Chapel, to the south of the abbey on the right, which is plain and unadorned save for its splendid 11th-century Norman doorway. It is said that Columba was prevented from completing the building of the original chapel until a living person had been buried in the foundations. His friend Oran volunteered and was duly buried. Columba later asked for the face to be uncovered so that he could bid a final farewell to his friend, but Oran was found to be alive and claimed he had seen Heaven and Hell, describing them in such blasphemous terms that Columba ordered he be covered up immediately!

Surrounding the chapel is the Reilig Odhrain, the sacred burial ground, which is said to contain the graves of 48 Scottish kings, including Macbeth's victim, Duncan, as well as four Irish and eight Norwegian kings. The stones you see today are not the graves of kings but of various important people from around the West Highlands and Islands. The most recent is that of John Smith, leader of the British Labour Party from 1992 until his untimely death in 1994.

Beside the Road of the Dead, which leads from the abbey church to St Oran's Chapel, stands the eighth-century St Martin's Cross. This is the finest of Iona's Celtic high crosses and is remarkably complete, with the Pictish serpent-and-boss decoration on one side and holy figures on the other. Standing in front of the abbey entrance is a replica of St John's Cross, the other great eighth-century monument. The restored original is in the Infirmary Museum, at the rear of the abbey, along with a fine collection of medieval gravestones.

No part of St Columba's original buildings survives, but to the left of the main entrance is St Columba's Shrine, the small, steep-roofed chamber which almost certainly marks the site of the saint's tomb. You get a good view of the whole complex from the top of the small grassy knoll opposite the abbey entrance. This is Torr an Aba, where Columba's cell is said to have been. The Abbey itself has been carefully restored to its original beautiful simplicity and inside, in a side chapel, are marble effigies of the eighth Duke of Argyll and his third wife, Duchess Ina.

Isle of Iona, Isle of Mull

The Abbey on Iona Cottages and Holiday SelfCatering