Stretching from Edinburgh Castle at the top to The Palace of Holyrood at the bottom. The street that most encapsulates the character of Edinburgh's Old Town. 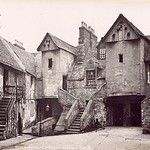 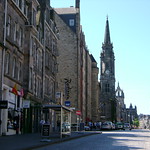 The Royal Mile is one of those streets that really depict Edinburgh. With its secret street which was built over in the time of the Black Death. The street has seen so much over the centuries and this is backed up by large amount of ghost and Ghouls walks. In the summer time when the festival is on the street really comes alive with stall and street performers. The street also has it's fair share of tourist shops, bars and restaurants. You will definitely be able to buy your Jimmy hat from the Royal Mile or at least a Scottish flag. The Royal mile ends up at the Holyrood Palace and Arthur Seat and the top end at the Edinburgh Castle.

The popular name for the string of streets which weave the main avenue of Edinburgh's Old Town is The Royal Mile. It gets its name for the reason that it stretches for a distance of almost one Scottish mile from the bull's eye in Scotland's history- The Edinburgh Castle to the polestar-Holyrood Abbey. The succession of streets which constitutes The Royal Mile include Canongate, Abbey Strand, Lawnmarket,Castlehill, High Street and the Castle Esplanade. The royal mile is one of the busiest tourist streets in entire Scotland and is packed with shops, restaurants, pubs and other landmarks of historical significance. It has also been tagged as one of the oldest streets in Edinburgh. The best time to visit it, would be during the festival though during winters the place gifts a magical atmosphere. During times of the Fringe Festival the place gives space for the best street performance in entire UK. Watch out for the Mercat tours (0131 225 5445), Witchery (0131 225 6745) and City of the Dead (0131 225 9044).

Although we tend to consider the Royal Mile as a single street, it is in fact a succession of streets starting from Castle Esplanade by the Castle to Abbey Strand beside Holyrood. Taken together, they take up one old Scottish mile (or thereabouts) from which the name arises. Today the street is either one you love or one you hate. The incredible popularity of Edinburgh as a tourist destination mean that the Royal Mile suffers from an onslaught of visitors as well as too many shops whose prime interest seems to be wheedling out of those visitors. (In January 2012 the council even had a meeting to discuss the predominance of tartan tat and what to do about it).

Don't miss out on fine Scottish malt at the Royal Mile Whiskies, here one can taste some of the world's best whiskies.

A great choice of knitwear are on sale at the Geoffrey.  So lot of things to look for here.

Note: All shops opens from 9am to 6pm (Mon-Sat)

Places to See In and Around Royal Mile

Running through the heart of the medieval Old Town, from the Edinburgh castledown to the Palace of Holyrood-houseHolyrood-house, is the Royal Mile, where you'll find a greater concentration of historic buildings than almost anywhere else in Britain. This street was described by Daniel Defoe (who lived in Edinburgh at the beginning of the 18th century) as "perhaps the largest, longest and finest Street for buildings, and Number of Inhabitants, not in Britain only, but in the world". It is now also one of the busiest tourist thoroughfares in the world, especially during the Festival. Consequently, it's full of shops selling tacky souvenirs, but not even this can detract from its sheer magnificence.

The 1,984 yards of the Royal Mile, from the Castle Keep to the Palace, comprises four separate streets: (from top to bottom) Castlehill, Lawnmarket, the High Street and the Canongate. Branching out from these is a honeycomb of wynds and closes, entered via archways known as pends. A close is the entrance to a 'land' or high-rise tenement block, and wynds are the narrow and winding alleyways giving access to the main street. These were the scene of many important – and sinister – events over the centuries and are certainly worth exploring in detail. Here, the city's aristocracy, gentry, merchants and commoners lived together, often in the same building, with the upper classes at the bottom and the hoi polloi at the top. Until the end of the 18th century, the Old Town was the hub of fashionable society. Indeed, such was the concentration of talent that John Amyat, the King's chemist, remarked that he could stand at the Mercat Cross and "in a few minutes take fifty men of genius by the hand".

At the turn of the 19th century the Old Town was gradually abandoned by the Great and the Good of Edinburgh, who moved lock, stock and barrel to the New Town in what was called 'The Great Flitting'. The Old Town deteriorated into an overcrowded slum. People would throw their refuse and sewage out of the tenement windows onto the street, shouting to the passers-by, below with the traditional warning of "Gardyloo" (from the French garde a l'eau). Not surprisingly, such a place of filth and squalor was highly vulnerable to epidemics and it is only in the past century that the Royal Mile has been cleaned and turned into one of the most fascinating and picturesque streets in the world.

Mary King's Close Edinburgh's most famous close is also one of its deepest secrets. Mary King's close is the most popular close on Royal Mile mainly owing to its centuries old legends and ghost stories. Re-opened to the public in April 2003, Mary King's Close is a happening tourist attraction today. It is nearby the city chambers and the entrance is through Warriston's. Mon-Fri 11am-6pm, Sat 1-5pm. Closed Sun. There are daily tours organized from 10am – 9pm (last tour), till 4pm Nov-Mar.

Scottish Poetry Library Nestled between St.Mary's Street and the Parliament, the library has a stupendous outreach poetry collection along with a large pensive space. If Edinburgh has won the status as a “City of Literature”, then this library does play a prime role behind it.