Built in 1815 in Tudor Gothic, Dalmeny House contains a superb collection of 18th-century French furniture, porcelain and tapestries and paintings, including portraits by Gainsborough, Raeburn, Reynolds and Lawrence. 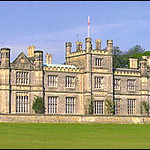 About five miles northwest of town is Lauriston Castle. One mile further west is the lovely little coastal village of Cramond , situated where the River Almond flows into the Forth.

From the other side of the river it's a two-mile walk to Dalmeny House, the Earl of Rosebery's home for over 300 years. The present house, built in 1815 in Tudor Gothic, contains a superb collection of 18th-century French furniture, porcelain and tapestries and paintings, including portraits by Gainsborough, Raeburn, Reynolds and Lawrence. There is also a fascinating collection of Napoleon Bonaparte memorabilia, assembled by the fifth Earl of Rosebery, a former Prime Minister. The house can also be reached via the village of Dalmeny, eight miles west of Edinburgh, on the A90 then B924. There's a bus service from St Andrew Square to Chapel Gate, one mile from the house, or you can take a train which stops at the village station. The main point of interest in the village is the wonderful 12th-century church.