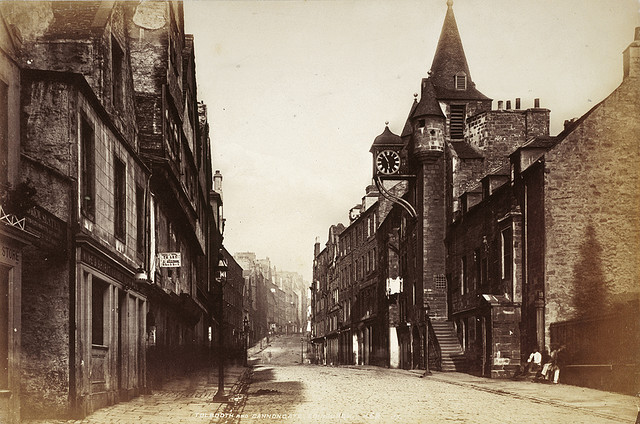 Edinburgh is one of the world's most beautiful capitals - but it has taken more than 1000 years of history to make it the historic city which is known and loved by visitors and Scots alike.

However, it only became the country's greatest city by the skin of its teeth - and if one of our greatest heroes, Robert the Bruce, had died just a few days earlier, then the shape of modern Scotland might have been very different.

It was The Bruce who first granted a charter to Edinburgh in 1329, only 10 days before he died. If he had not done so, then Berwick, which at the time was the biggest and richest burgh in Scotland, might well have become the Scottish capital instead.

That could have meant Edinburgh staying as a town rather than the great European city it has since become - but at the same time Berwick could have evolved as the nation's capital and may well have stayed a Scottish town instead of finding itself in England, as it now.

People have lived on the present site of Edinburgh's most famous attraction - the castle - since the 6th century, though nearly the development in the so-called old town which you see today dates from the middle ages or later.

Edinburgh may be a spacious and elegant city now, but as it evolved into Scotland's capital, it became so dirty and overcrowded that people living there almost choked to death on the grime and the smell.

Buildings in and around the historic Royal Mile from the Castle down to the Palace at Holyrood may look desirable and attractive these days, but in the middle ages, the area was so squalid that it became known as Auld Reekie - a nickname which has stuck right up to the present day.

Edinburgh was always going to be a prime site for human settlement, because its geographic position near the River Forth made it both attractive and highly defensible.

With its high and steep walls and commanding views of the countryside, the rock on which the castle is currently built was a perfect spot for a fortified settlement. However, serious building didn't really start to take place until the 11th century, when a small town began to grow up around the site which had been fortified by Malcolm Canmore and his wife, Saint Margaret of Scotland.

The Abbey of Holyrood was founded in 1128 by David I, and the existing Canongate grew up around it. David is also thought to have founded St Margaret's Chapel at Edinburgh Castle - the oldest part of the building, which still survives to this day.

In David's time, there was no real capital of Scotland - the king and his retune simply travelled round various residencies. However, Edinburgh Castle became one of their regular stopping off points, and a population slowly grew up around it.

David's influence on Edinburgh marked the start of its growth into the great city we know today. In 1130 he granted it the status of a burgh, which meant that it had permission to act both as a market and as a centre for early manufacturing industries such as cloth weaving. This helped build its prosperity, as did the king's decision to allow the first ever Scottish coins to be minted in the town.

As Edinburgh expanded, so houses were built on the ridge between the castle and Holyrood - in other words, along the present Royal Mile. King David continued to encourage population growth, finding that French, Flemish and English craftsmen were keen to move in.

Even in these early days, Edinburgh was turning into an international community. Leith, two miles away on the banks of the Forth, was already established as a port and trading with the Baltic states and the Low Countries such as Holland.

One problem the fledgling town faced was that its proximity to the English border made it vulnerable to regular attacks from the auld enemy. In 1296, for example, Edward I pummelled the castle into submission, and in 1385 the English king Richard II burned down the High Kirk of St Giles and the nearby town hall.

However, by the end of the 14th century, Edinburgh had grown into the biggest and most heavily populated burgh in Scotland. It wasn't exactly bursting - it only had about 350 houses - but it had assumed a predominance which it was to maintain right up until the rise of Glasgow 500 years later.

By the middle of the 15th century, Edinburgh had established its own council and suburbs had developed in the area around the existing Cowgate and Grassmarket. After the terrible defeat of James IV and his army by the English at Flodden in Northumberland, a defence known as the Flodden Wall was built around the town to protect it from the invasion which Scots were sure would come.

Until 1437 Perth was the capital of Scotland, but Edinburgh took the title after James I was murdered. However, it was still far from the attractive, elegant city we know today. It may not have been very big, but it was certainly getting very crowded.

The problem was that the Flodden Walls built to keep the English out also served to keep the local population in. Because the walls physically constrained the population inside them, residents were forced to construct new buildings in the only available direction - upwards.

The result was that tall tenements sprung up, along with the characteristic network of wynds and narrow closes which are so familiar in the old town today. In a way, medieval Edinburgh was similar to 20th century New York - people came to gape at the tall buildings, and were astounded to see at least one building which rose to an incredible 14 storeys.

After the union of the crowns of Scotland and England in 1603, the city suffered for a while because some of the business which was previously transacted there moved to London. However, it continued to be the meeting place of the Scottish parliament right through to the Treaty of Union in 1707.

Some of the buildings in the city - St Giles Cathedral, for instance - were by then among the most beautiful in Europe, though the local population almost certainly didn't appreciate the quality of the architecture around them. They were simply too crowded in and too wretched to care.

In the 120 years between 1570 and 1690, the population of the city grew threefold from 7000 to 21,000. Only a few years later, this had risen to 40,000 in a space of just 140 acres. This is the equivalent of packing almost the entire modern city of Perth into about a dozen farmers' fields, and then expecting them to be able to live in that area.

Living conditions, unsurprisingly, were little short of appalling. The plague hit Leith in 1645 and wiped out half its population, and it is only a matter of luck that the centre of the city did not suffer as badly.

People simply threw their stinking garbage into the streets, leaving it to be washed away by the rain or by other rubbish. Rich and poor lived cheek by jowl with each other, and disease and crime were rife.

Eventually, it was recognised that new accommodation had to be provided to allow the city to flourish. In 1752, by which time there had been several serious fires and building collapses in the city, plans were drawn up for the creation of a New Town outside the city walls.

That New Town was to be one of the most imaginative building projects Scotland has ever seen, and its elegant streets and crescents still make up much of the Edinburgh the world knows and loves today. But before it could be built, Scotland and England had to start resolving their age-old differences and come together?