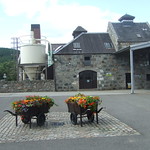 About one mile from the Royal Family's castle at Balmoral, Royal Lochnagar was established in 1845 by John Begg, when it was known as New Lochnagar, as there was an older distillery nearby (which closed in 1860). Lochnagar became ORoyal' after a visit by Queen Victoria and Prince Albert in 1848. The distillery was rebuilt in 1906, then acquired by John Dewar and Sons in 1916. It is now part of United Distillers, and the water comes from springs in the foothills of Lochnagar, a mountain which rises to 3789 feet.

The distillery produces the Royal Lochnagar Single Highland Malt Scotch Whisky which has a medium-bodied taste with creamy, sweet overtones. In the visitor centre, converted from the old distillery farm steading, there is a whisky shop and exhibition area.

Comments: Royal Lochnagar Selected Reserve is a special bottling available from time to time at 43%. Expect to pay around #159.

Children under eight years of age are welcome but are not encouraged to take the tour.