Old  Pictish cross slab that has been removed to the church and replaced with a replica. Sweet village and good walking. 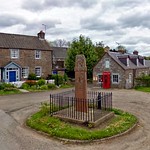 According to Elizabeth Sutherland in In Search of the Picts this is illustrative of the Jonah and the Whale story; in the top-left corner the whale has swallowed Jonah leaving his sword and shield--in the top-right corner the whale is disgorging him.

Below the arms of the cross are two seated figures. These are Paul (on the left) and Antony (on the right) -- two early Christian hermits and saints. They supposedly lived alone in the desert in the early years of Christianity, meeting just before Paul's death at the age of 113 years. The story is that Paul fed on and was clothed by date palms, seen before and behind the figure on the left; a spirit (seen behind the figure on the right) revealed to Antony the presence of Paul in the desert.