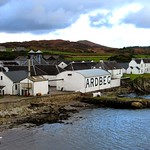 The most accessible of the islands is Mull, a short ferry ride from Oban. It's also the most popular by far, and with some justification. The variety of scenery on offer is astounding and its capital, Tobermory, is the most attractive port in western Scotland. A stone's throw from Mull is tiny Iona, one of the most important religious sites in Europe, with some divine beaches. Boat trips can be made from Mull or Iona to the dramatic island of Staffa, looming out of the sea like a great cathedral and the inspiration for Mendelssohn's 'Hebrides Overture'. Further west, windswept Coll and Tiree offer miles of unspoilt beaches and some great windsurfing and, to the south, Colonsay is a stress-free zone that makes Mull seem hectic.

Those who enjoy a good malt whisky should head for Islay, famed for its distilleries, while neighbouringJura is a wild and beautiful place, perfect for some off-the-beaten-track hiking. If you're after some peace and quiet on Jura then you're in good company, for this is where George Orwell came to write '1984'. Furthest north are the "small islands" of Eigg, Muck, Rum and Canna, reached from Mallaig, but ignored by most tourists. People come here for the fine bird watching and superb walking.

Car space on ferries is limited during the summer months, so it's advisable to book ahead.

CalMac car and passenger ferries sail to and from Mull, Islay, Coll, Tiree, Colonsay and Gigha, and passenger-only ferries sail to Iona and the Small Isles (Eigg, Muck, Rùm and Canna). The departure point for ferries to Mull, Coll, Tiree and Colonsay is Oban. Ferry times change according to the day of the week and time of the year, so they aren't listed in full below. Services listed below under each separate island are for the summer period (2 Apr-16 Oct). For full details see the CalMac Ferry Guide or call CalMac, Tel. 08705-650000, This email address is being protected from spambots. You need JavaScript enabled to view it. (reservations); Tel. 01475-650100, Calmac Ferry Services (general enquiries).

For details of bus connections from Oban to Glasgow, contact Scottish Citylink, Tel. +44 990-505050.  orOban and District Buses (also known as West Coast Motors) on +44 1631 562856. For train services from Mallaig to Fort William and Glasgow, contact Scotrail, Tel. 08457-484950. There are regular daily train and bus services from Glasgow. For full details contact the TIC in Oban, Tel. 01631-563122. The departure point for ferries to Islay (and on to Jura), and some ferries to Colonsay, is Kennacraig. There are daily bus services from Glasgow, via Tarbert . Mallaig is the ferry port for the Small Isles of Eigg, Muck, Rùm and Canna. There are regular bus and train services from Glasgow, via Fort William. For bus, train and ferry times, pick up Argyll & Bute Council's free Area Transport Guides to Lorn, Mull and Islay & Jura, available at most tourist offices. For times of buses and trains to Mallaig, for the Small Isles, see the South Highland Public Transport Travel Guide (£1), available at main tourist offices. For details on how to get around the Inner Hebrides by public transport, see under each relevant island destination.

Island Hopscotch Tickets: Island Hopscotch Tickets are a cheaper way to get around the islands with a car. There are various route options, and tickets give you 30 days' unlimited travel on each route. For example, a ticket for the Oban-Craignure-Tobermory-Kilchoan- Mallaig-Armadale route, allowing you to visit Mull andSkye, costs £8.55 per passenger and £53 per car. See the CalMac guide or call the numbers above for full details of the Island Hopscotch Tickets, and the Island Rover Ticket, which gives unlimited travel on most CalMac routes for 8 or 15 days. (2011 Update: I think these prices are out of date, but we have retained them)

Things to do in the Inner Hebrides

Things to do on Mull when it's wet

It rains a lot on Mull, but luckily there's a fairly large number of indoor options to keep you nice and dry until the weather changes. If you've just arrived off the ferry from Oban and it's chucking it down, then head straight for Torosay Castle, just to the south of Craignure. And if the weather changes whilst exploring the interior, don't miss the gardens.

Just beyond the castle is Wings Over Mull, a bird of prey conservation centre which offers indoor hawk-handling and a chance to learn about the island's incredible bird life. Nearby is Mull's greatest fortification, Duart Castle, which is also worth a peek. If all that history gets too much then you could do worse than hole up in the bar of the Craignure Inn and relax in front of their roaring log fire.

In the north of the island, the most appealing option by far is the Old Byre Heritage Centre, not far from the picturesque village of Dervaig. When in Tobermory do as the locals do, and get yourself down to the bar of the Mish, though you shouldn't really need the excuse of inclement weather. Meanwhile, over in Fionnphort, the departure point for the pilgrimage to Iona, you can seek spiritual assistance with a wee dram in the cosy Keel row bar.

The history of 16th-century Europe is littered with the remains of carefully forged and hastily broken political alliances between the various superpowers. One such deal between England and Spain was broken in 1588, prompting Philip II of Spain to send the Spanish Armada, a massive force of 130 ships, to take on the English navy. Originating in Cadiz, the Spanish force moved north and left Lisbon on 20 May. They met Queen Elizabeth's ships in the English Channel, where they were duly routed.

A number of Spanish ships fled up the east coast, chased by the British fleet as far as the Firth of Forth. Denied entry into the estuary by further British naval forces, the tattered remnants of these great Spanish galleons were no longer considered to pose a threat and were left to their own fate. Many continued up the east coast of Scotland, only to be wrecked in the perilous North Sea. Not all the crews drowned, however, and several integrated into local communites, where their descendants still live to this day. Most of their offspring were distinctively black haired and there is strong facial resemblance even today between some on the northeast coast of Scotland and the residents of Cadiz, from where the Armada originally sailed.

Some Spanish ships headed for the west coast, but were lost in a violent storm in the Hebrides. One galleon, the Florida, was lost in Tobermory harbour, reputedly carrying £300,000 worth of gold bullion. However, during recent dives all that was found on the seabed were rotted timbers, a sailor's bangle and a silver spoon.

The Story of St Columba

St Columba (Colum Cille in Gaelic), a prince of Ireland and grandson of the Irish King, Niall of the Nine Hostages, came to Scotland not as a missionary, but as an act of self-imposed penance for his actions. He stubbornly refused to hand over his copy of the Gospels, illegally copied from St Finian's original, which led to a bitter dispute with the king. This ended in a pitched battle in which Columba's supporters prevailed, but he was so overcome with remorse at the bloodshed he had caused that he fled Ireland, finally settling on Iona as it was the first place he found from where he couldn't see his homeland.

Columba, however, was not retiring into obscurity. His missionary zeal drove him to begin work on building the abbey. He also banished women and cows from the island, declaring that "where there is a cow there is a woman, and where there is a woman there is mischief". Workers at the abbey had to leave their womenfolk on nearby Eilean nam Ban (Women's Island). Not content with that, he also banished frogs and snakes from Iona, though there are plenty on Mull. He is even said to have pacified the Loch Ness Monster during a visit to Inverness. He went on to found the Celtic Church, or the Church of the Culdees, with centres throughout Scotland, which differed in many ways from the Church of Rome.