At the end of Lothian road and a confusing mass of roads going off into different directions. For a visitor to Edinburgh, this is your "here's Jonny" moment! 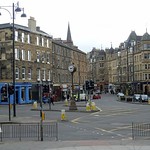 It seems unlikely that Tollcross was the original toll point for entry into Edinburgh as all the evidence points to other locations for levying taves on vehicles and beer. More likely it was given the name after Lothian Road was built in the 18 century.

The cross is now a clock and the crossing is the roads leading in just about every direction. On the one hand Lothian Road leads you towards Princes Street, another leads to Lauriston Place which skirts the Old Town and another leads to the South West of Edinburgh and Bruntsfield and Morningside.

It would be difficult to describe Tollcross as charming. It is what happens when planners build lots of roads and ignore local communities.