Tower house in the north of Mainland Island in Shetland built around 1600 by the notorious Patrick Stewart. Now roofless, it is still impressive. 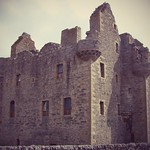 The castle was built by the earl after he had moved the site of government from the Orkneys. He was only the ruler for a decade or so although during that time he managed to build himself a notorious reputation for himself as a cruel tyrant. He was arrested in 1609 and then later executed in Edinburgh in 1615. The castle was both residence and court house and featured public rooms on the ground floor as well as a private suite for the earl above.

After his death, the castle continued to be used as the seat of government and we know that a new executioners axe was ordered for the castle in the C18th.