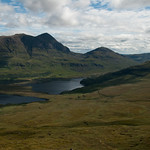 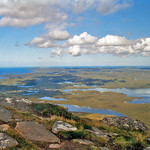 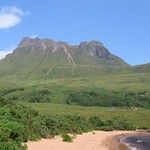 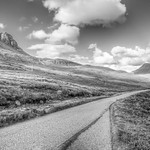 Between Ullapool and Knockan Crag is the turn-off west (left) to the distinctive craggy peak of Stac Pollaidh. A new path has been recently established by the John Muir Trust, which takes you on a circular walk around the peak from the car park. Take the right-hand path and go round at the same level, or climb up the rear to the top, go around the summit and descend by the same path. You'll need a head for heights to reach the summit as much of the route is exposed, but the stunning views are worth it. Be careful not to stray from the path; it's been put there because of the damage inflicted by tens of thousands of pairs of boots each year, resulting in serious erosion on the south face. It's a fairly easy 2 1/2 hour walk.

Stac Pollaidh is a fine wee hill, with a popularity out of proportion to its height of 613m. Take the A835 north out of Ullapool and turn left for Achiltibuie and the Summer Isles after about 16km. An Inverpolly Nature Reserve Car Park lies on the lochside of the road under the hedgehog ridge that is the feature of this short walk. It is suitable for a morning or afternoon, or even an evening if you have just arrived in this area and wish to both stretch your legs and see what's on offer!

The hill has been so popular that the steep path up loose slopes became badly eroded. Much work has contained this damage however and in fact Stac Pollaidh is one of the few hills circumnavigated by a path at height! Cross the road, go through a gate and head up the obvious path. Where it splits, you may go left or right depending, possibly, on the wind direction or a personal whim. Both ways lead round the mountain and onto its north flank, leading to below the col at about midway along the ridge.

A final steep ascent takes you to the summit ridge. Even from here, the views are great, with Ben More Coigach to the south across Loch Lurgainn and Cul Mor, Cul Beag, Suilven Canisp and Quinag to the north. The spiky ridge of Stac Pollaidh is formed from eroded layers of Torridonian sandstone, ground down over the millennia into a wonderful collection of towers, ridges and pinnacles. The path is very clear, winding its way in and out of these towers and leading to the top of a gully near to the west end.

The direct exit out of this gully is exposed and awkward but an easier way may be found starting a few metres down the gully on the south side. Once out on the ridge again, the summit is just a little way further.

Descent is via the same route and once back at the col and descending to the encircling path, you may care to return in either direction.

Food & Drink: To the south Ullapool has a good choice of watering holes, while Inchnadamph to the north is a smaller option. 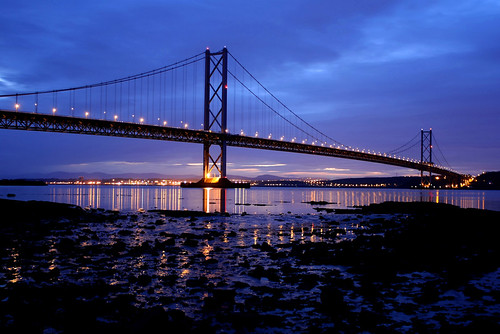 Home to the somewhat legendary hydroponicum (now closed) and a centre for growing plants out of soil. Very interesting, and you can buy kits as well.