Scotland's most strategic castle with a dominating position over the gateway to the North of Scotland. 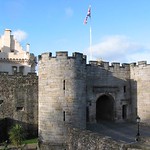 Stirling Castle has been spectator to more battles and significant battles at that, then any other castle in Scotland. As you drive past on modern roads, it is difficult to understand why it should be so important although its imperious position overlooking the flat carse land is evidence of its stature.

However, imagine the roads gone and all the flat land as marshy and peaty bog and that there is only road passing the castle to the North and you get a sense that this is the key to the north. IN the past, the land between the firth of forth all the way to Glasgow was flat and waterlogged and so roads were critical to the movement of baggage or a marching army. Whoever held Stirling Castle effectively controlled the road. It was for this reason that England held the castle so tenaciously and why the Battle of Bannockburn was fought in its shadow. Whoever holds Stirling controls the flow between the Highlands and Southern Scotland.

Anybody wishing to understand Scottish history will certainly want to visit. Furthermore, the castle is in excellent condition and is a great day out!