Often ignored by visitors focusing on the stones in the churchyard, these crosses inside the church should not be missed either. The older dates before 10th century. 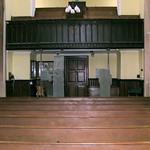 There are two crosses that date from probably the 8th or 9th century. originally outdoors, they are now inside the church.

The taller of the crosses depicts the crucifixion. A section of the cross arm was previously lost but then later rediscovered and is now attached to the cross head with a small metal bar. The smaller cross is wonderfully carved with a variety of geometric patterns. The rear of the cross has patterns carved around a rounded central boss.

The older of the Kilmartin crosses has inspired Celtic style jewellery in the shape of the cross. In addition to the two large crosses there is another small cross fragment within the church. This is less interesting. The interior of the chuch is victorian and not interesting.