A few miles beyond Arrochar, on the shores of Loch Long, is Ardgarten, where there's a tourist office and visitor centre, Tel. 702342, which is open daily April-October 1000-1700, till 1800 in July and August, and provides useful advice and information on hillwalking and wildlife, as well as organizing various local activities.

From Ardgarten the A83 climbs steeply up Glen Croe to reach one of Scotland's classic viewpoints at the top of the pass, the Rest and be Thankful. The hordes of like-minded tourists, eager for that memorable photograph, cannot detract from the majestic views of the surrounding craggy peaks.

Here the road forks. The A83 continues towards Inveraray and the single-track B828 heads southwest to meet the B839, which runs down to the village of Lochgoilhead, in a beautiful setting on Loch Goil. There are several hotels and B&Bs as well as an unsightly village of self-catering holiday chalets next door. At the end of the road, several miles down the west side of Loch Goil, are the ruins of 15th-century Castle Carrick. 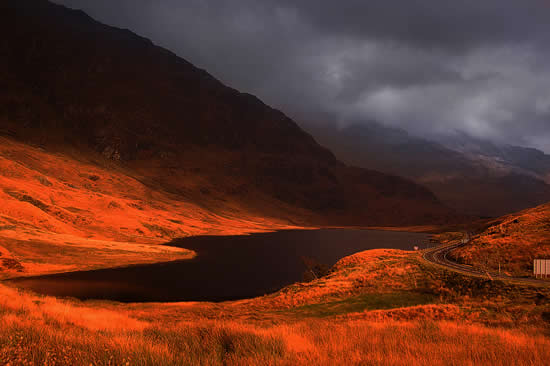 The A83 meanwhile runs down through Glen Kinglas to reach the village ofCairndow, at the head of Loch Fyne. Nearby is the Ardkinglas Woodland Garden, (website here)which contains an impressive collection of exotic rhododendrons, as well as the largest conifers in Europe, over 120-ft high and 30-ft in girth. Daily dawn till dusk. Free. Tel. 01499-600263.

A mile or so further on towards Inveraray, at Clachan, at the head of Loch Fyne, is the highly acclaimed Loch Fyne Oyster Bar.

Just before Cairndow, the A815 branches left and runs south down the eastern shore of Loch Fyne. At Strachur it turns inland and heads down to Loch Eck, a very beautiful and narrow freshwater loch, popular with trout fishermen. At the southern end of Loch Eck, at Benmore, is the Younger Botanic Garden, a lovely woodland garden and offshoot of the Royal Botanic Garden in Edinburgh. Its 140 acres are laid out with over 250 species of rhododendrons and feature an avenue of Giant Redwoods. Open Mar-31 Oct daily 0930-1800. Tel. 01369-706261.

A83 - The OId Military Road

In Ardgarten there's an SYHA youth hostel, Tel. 702363, open Feb-Dec and Forestry Commission campsite, Tel. 702293, open Easter-Oct. We are not aware of anything else.