Evie & the Broch of Gurness

Nine miles northwest of Kirkwall is the tiny village of Evie. A track leads from the village towards the coast, past a sandy beach, to the Broch of Gurness. 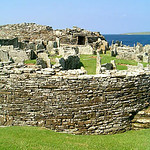 Standing on a lonely, exposed headland on the north coast, with warm, gentle views across towards the island of Rousay, this is the best-preserved broch on Orkney, thought to date from around 100 BC. It is surrounded by an Iron-Age village whose houses are also remarkably well-preserved, with the original hearths, beds, cupboards and even a toilet still in evidence. The broch and village were occupied by the Picts right up till Viking times, around 900 AD. Many Pictish artefacts have been found on the site, and the grave of a ninth-century Norse woman was also discovered. Info - Apr-Sep daily 0930-1830. Adult £2.80, concession £2, children £1. Tel. 751414 (HS). west mainland

To the southwest of Evie is the Birsay Moors RSPB Reserve, and at Lowrie's Water on Burgar Hill there's a bird-hide from where you can watch breeding red-throated divers. Also on Burgar Hill you'll see several huge aerogenerators built to take advantage of Orkney's fierce winds.