Kilmahog is a hamlet situated half a mile to the west of Callander along the River leny, Scotland. 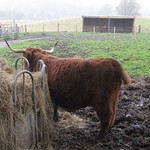 Kilmahog is a hamlet situated half a mile to the west of Callander along the River leny, Scotland.The village has a few houses and the woolen mills of Trossachs Woollen Mill and the Kilmahog Woollen Mill, which has retailing facilities. Roman ramparts that can be seen even today in the fields to the east of the former railways.ome of the other landmarks include a local pub and the old chapel, called The Lade Inn. Kilmahog is well known for the Samson's Putting Stone, which sits precariously on Bochastle hill. The legend is that this stone was used in the putting competition between a family of giants, which was won by Samson who lived on Ben Ledi. The former Callander and Oban Railway line, which passed through Kilmahog is now part of the National Cycle Network and the Rob Roy Way.Kilmahog also had been the main setting in the fictional novel "Under the Mountain" by Sophie Cooke.

A84 Stirling to Lochearnhead