Small village to the south of Rannoch Moor that sits on the battlefield where Bruce was defeated by the macDougalls in 1306. It was a mining community once and there is talk of a new gold mine opening. 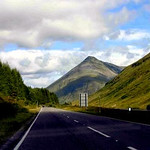 Tyndrum is a small village that most people drive through on their way north except for walkers on the West Highland Way. It has an excellent cafe which serves award winning fish & chips which you might need before the start of your journey across Rannoch Moor.

The West Highland Railway stops at Tyndrum and the  main road to Fort William, the A82 passes through. It is also served by coaches from Glasgow operated by Citylink.

A82 Glasgow to Inverness | A85 Oban to Dundee

Lying to the North West of Tyndrum is a large cairn, possibly originating from the Bronze Age, called Carn Droma, Carn Druim or Carn Drom. The monument used to mark the entry point to Argyll on the route now taken by the A85 Glasgow to Oban road. The cairn marks the spot where the route crossed the watershed divide between the Tay basin and the lands of Loch Awe and Lorne. Prior to the formation of the kingdom of Scotland, this was the frontier between the Picts of the east and the Scots of Dal Riata in the west.

The cairn itself is partly covered by forestry plantations and is in a dilipidated state, and has not appeared on local maps for around two centuries. However, the cairn is interesting from a number of perspectives including the geopolitics of ancient Scotland. It is now protected under the West of Scotland Archaeology Service’s remit but would benefit from further investigation and conservation.