50 square miles of boggy and peaty moorland that separates the southern highland line from the Glencoe Massif. An SSSI and one of Britain's few wild uninhabited places. 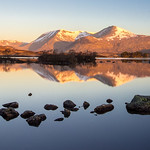 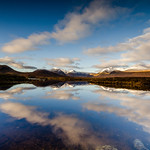 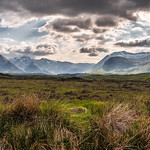 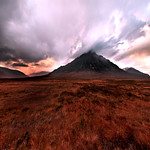 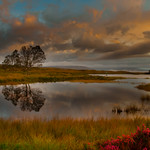 Rannoch Moor is a wondrous upland peat moor that stretches between Loch Rannoch to Glencoe. At its western tip it is framed by Glencoe Massif and Buchaille Etive More

Rannoch Moor is a large expanse of around 50 square miles (130 square kilometres) of boggy moorland to the west of Loch Rannoch, in Perthshire and Kinross and Lochaber, Highland, partly northern Argyll and Bute, Scotland. Rannoch Moor is designated a National Heritage site as one of Britain's last truly unspoilt wildernesses

Rannoch Moor is notable for its wildlife, famous as the only British location for the Rannoch Rush, which is named after the moor. It was also frequently visited by Horace Donisthorpe, who collected many unusual species of ants on the moor and surrounding hilly ground. Today it is still one of the few remaining habitats for Formica exsecta, the "narrow-headed ant", although recent surveys have failed to produce any sign of Formica pratensis, which Donisthorpe recorded in the area in the early part of the 20th century.

The thick peat deposits pose major difficulties to builders of roads and railways and houses which has protected it over the years from the encroachments of humans. Likewise the soil offers poor sustenance for grasses so there is little farming activity.

When the West Highland Line was built across Rannoch Moor, its builders had to float the tracks on a mattress of tree roots, brushwood and thousands of tons of earth and ashes. The trains stop at Rannoch Station, surely one of the most isolated and beautiful stations anywhere in the world.

Rannoch Moor is surely what a world might look like without humans. A world at its most raw and magnificent.

The A82 road crosses through Rannoch Moor on its way to Glen Coe and Fort William.

The only way to really see the moor is by coach tour (many of which pass through) or by car on the A82. The west Highland line passes across and stops at Bridge of Orchy and Rannoch Station which must be one of the most pretty stations since it seems to serve no communities at all.

People come to Rannoch to experience the wildness of the place and you can stop just about anywhere to enjoy. The view over Loch Tulla towards the Black Mount is a classic and frequently photographed view.

If you want to stay in the area to explore, you might choose Kings House Hotel on the northern edges of the Moor which is a 17rth century inn. It is said to be Scotland's oldest or one of the oldest licensed inns in Scotland. You also stop for coffees or a bevvy in the main bar which stocks local scottish ales. Tel: 01855 851259, web: http://www.kingshousehotel.co.uk/

There is also the Bridge of Orchy Hotel with a bar and restaurant at Bridge of Orchy on the main A82. This is a one hotel town and it is then 24 miles or more before the next stop at Glencoe.

If you leave the road at Loch Tulla, you can drive west for a mile or two to come to the Inveroran Hotel which has its own bar as well and is a popular stopping place for people on the West Highland Way.