South of Strathearn is the trim little town of Auchterarder, overlooked by the Ochil Hills to the south and surrounded by rich farmland. There's a Tourist Information Centre on the High Street. Tel. 663450. Apr-Jun, Sep and Oct Mon-Sat 0930-1730; Jul and Aug Mon-Sat 0900-1800, Sun 1100-1600; Nov-Mar Mon-Fri 1000-1400 (do check opening hours). The adjacent heritage centre tells of centuries of local history – from agriculture to education – including information on the local textile industry which has been going here since the 16th century. Most people come here to play golf at the world-renowned Gleneagles Hotel. 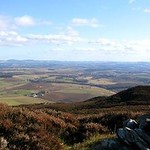 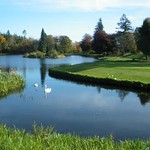 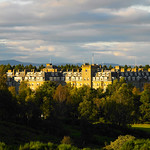 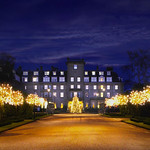 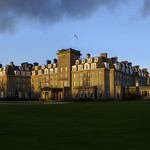 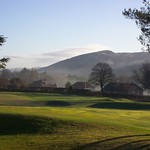 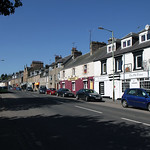 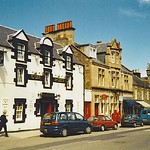 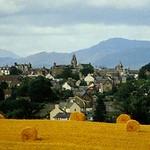 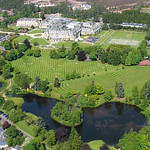 This once Royal seat was popular with kings for it hunting. Later the water supported breweries and then later the weaving industry. Today the town is concerned mainly with tourism and local industries.

The town has gone under various names in the past, all of them impossible to speak let alone pronounce:-Ochteraider; Outread; Uthrardor; Ochterarder; Oughterdoner; Uchterardour; Uchtirardour; Auchterardour; Eochterardeour. Auchterarder was also known far and wide as the 'Town of the 100 drawbridges'. These 'drawbridges' were narrow bridges leading from the higher level of the road across wide gutters to the doorsteps of the houses. They kept feet dry and, when removed could discourage intruders.

Throughout the middle ages, the town was relatively prosperous, but by 1707 and the Union of the Scottish and English Parliaments, the town had already started to go into decline and unable or unwilling to pay its tax dues to the government it lost its privileges as a Royal Burgh. During the Jacobite Rising of 1715 the Battle of Sheriffmuir was fought on the great moors nine miles south west of the town in November 1715. The Jacobite leader, the Earl of Mar, was thereafter forced to fall back on Perth. In his retreat he destroyed food and shelter for the pursuing armies and Auchterarder, like other villages on the route, was consequently destroyed. In the following winter many townsfolk starved and 60 years later the Commissioners responsibly for rebuilding the town had still not completed their work.

Over time the town became increasingly associated with hand weaving and it was said every house had an outhouse behind with a hand loom.

The town also figured in the national religious turbulence of the 18th & 19th centuries. The Presbytery's 'Auchterarder Creed' gave rise to the Secession Church of 1732 and the Church of the Disruption is still represented by a Tower built from the stones of the old Kincardine Castle, the home of the famous James Graham - Marquis of Montrose. In 1834 the rejected the minister imposed  on them by the local lairds. Auchterarder was the first to reject a laird’s choice. The case went as far as the British parliament, which somewhat predictably took the side of patronage. The people of Auchterarder’s response was simple and dramatic. The people walked out and set up their own establishment, outside parliamentary control. This “great disruption” was cited worldwide as an encouragement to freedom of political and religious thought.

If staying at the Gleneagles Hotel is a little beyond your means, you could consider eating at the main restaurant, the refreshingly unstuffy Andrew Fairlie at Gleneagles (provides only dinner and not on Sundays). It's one of the finest restaurants in Scotland, with innovative, dynamic dishes created by the immensely talented Scottish Chef - Andrew Fairlie.

Phoenix Falconry - an excellent collection of various birds of prey, and an entertaining way to spend an afternoon. Easterton Farm, By Gleneagles, Blackford PH4 1RQ. Tel 01764 682823   see their Website

Check out the best deals and prices with LateRooms for hotels and guesthouses in the Auchterarder area.

Scotland's finest five-star hotel, Gleneagles Tel. 662231, is a luxury 5-star hotel and leisure resort with 3 top-class golf courses. If you can afford it, there is no better way to pamper yourself. The restaurant, Andrew Fairlie at Gleneagles (Tel. 694267), is equally impressive and expensive.