Small Highland tour that is a frequent stopping place for coaches travelling along the A9. Somewhat a one road town of shops and cafes. 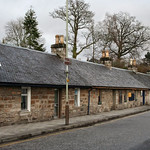 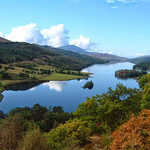 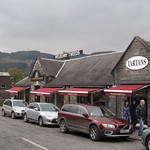 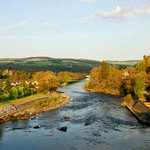 Despite being one of the busiest Highland tourist towns in the summer, Pitlochry's lovely setting on the shores of the River Tummel, overlooked by Ben y Vrackie, makes it a pleasant base for exploring this beautiful area.

The Killiecrankie Hotel is expensive but the best place to eat. The bar is less formal and cheaper than the restaurant. In town try Port-na-Craig Inn & Restaurant, Tel. 472777, which is just below the Festival Theatre on the banks of the River Tummel. It offers great Scottish cooking at mid-range prices in a bistro ambience. Another good choice is the Old Smithy, at 154 Atholl Rd, Tel. 472356, which is moderately priced and open daily till 2100; or The Old Armoury, Armoury Rd, Tel. 474281.

A couple of miles south of Pitlochry on the old A9 road is the East Haugh Country House Hotel & Restaurant, Tel. 473121, a 17th-century country house with excellent and elegant dining and great bar lunches (lunch mid-range; dinner expensive). A few miles north of Pitlochry, at Moulin on the A924 is the wonderful Moulin Inn, Tel. 472196, which serves good, hearty, cheap pub food and fine real ales (try their 'Braveheart') in a great atmosphere. Food daily till 2130.

Getting there The bus and train stations are on Atholl Road. Scottish Citylink buses run almost every hour between Glasgow (2 hrs 15 mins), Edinburgh (2 hrs 45 mins) and Inverness (2 hrs) via Pitlochry. Stagecoach buses run daily except Sun to Aberfeldy, Dunkeld and Perth. Pitlochry is on the Perth-Inverness rail line and there are several daily trains (Mon-Sat; fewer on Sun) to Perth (30 mins).

The bus and train stations are on Atholl Road. Scottish Citylink buses run almost every hour between Glasgow (2 hrs 15 mins), Edinburgh (2 hrs 45 mins) and Inverness (2 hrs) via Pitlochry. Stagecoach buses run daily except Sun to Aberfeldy, Dunkeld and Perth. Pitlochry is on the Perth-Inverness rail line and there are several daily trains (Mon-Sat; fewer on Sun) to Perth (30 mins).

There's a caravan park within the castle grounds, Tel. 481263, open April-October, with good facilities. A very good walk starts from the caravan park and heads up into Glen Tilt. It's about 10€ miles there and back along estate roads, though this can be shortened by four miles or lengthened by six miles. A leaflet describing the routes is available from the castle or caravan park.

Not all trains stop at Blair Atholl. Elizabeth Yule Transport runs a service between Pitlochry and Blair Atholl, via Killiecrankie, a few times daily, except Sun. You can hire bikes from Atholl Mountain Bikes, Tel. 473553. They have a leaflet listing various cycle routes, including the Glen Tilt route above.

The B8019 turns off the B8079 road from Pitlochry to Blair Atholl and runs west along the shores of beautiful lochs Tummel and Rannoch, best seen in the autumn when the trees change their colours. At the eastern end of Loch Tummel is Queen's View, a spectacular viewpoint which looks down the loch and across to Schiehallion. There's a visitor centre here, with displays and audio-visual programmes about the area. Apr-Oct daily 1000-1730. Free, but £1 parking charge. Tel. 473123.

Schiehallion (3,552 ft) is one of Scotland's best-loved mountains, whose distinctive conical peak made it ideal for use in early experiments in 1774 to judge the weight of the earth. These were not an unqualified success, but led to the invention of contour lines as an aid to surveying the mountain. The walk to the summit is fairly straightforward, except for the very rocky final stretch. You'll need to be properly clothed and equipped and take a map and compass. The route to the summit starts at the car park on the B846 Kinloch Rannoch to Aberfeldy road, near Braes of Foss.

Place To See Around Pitlochry

There are two whisky distilleries to visit. The larger of the two is Bell's Blair Atholl Distillery, at the southern end of town, heading towards the A9 to Perth.

Pitlochry's main attraction is the fish ladder, part of the power station and dam which formed man-made Loch Faskally when it was constructed on the River Tummel. The ladder allows salmon to swim up to their spawning grounds and you can watch them leaping spectacularly in the spring and summer. The best months are May and June. The fish ladder is across the river, a short distance from the Pitlochry Festival Theatre. In summer 2002 the Scottish Plant Collectors Garden will open in the grounds of the theatre. Contact the theatre for further information.

Another excellent walk from Pitlochry, described in the tourist office leaflet, leaves town on the north road and turns left past the boat station. It then crosses the Cluanie footbridge and follows the road to Loch Faskally and up the River Garry to Garry Bridge over the Pass of Killiecrankie. The path returns to Pitlochry along the west bank of the River Garry, before turning west up the River Tummel, passing close by the Linn of Tummel, then crossing the Tummel and following the west shore of Loch Faskally to the dam and fish ladder.

Also here is the Explorers-The Scottish Plant Hunters' Garden that fascinates the visitors with its wide display of diverse plant species and trails, which pays tribute to the story of Scotland's 18th and 19th century botanists and explorers. Apr-Oct daily 1000-1700, £3, concession £2.50, children £1. TEL. 484600, http://www.explorersgarden.com

Four miles north of Pitlochry the A9 cuts through the Pass of Killiecrankie, a spectacular wooded gorge which was the dramatic setting for the Battle of Killiecrankie in 1689, when a Jacobite army led by Graham of Claverhouse, Viscount 'Bonnie Dundee', defeated the government forces under General Hugh Mackay. One government soldier evaded capture by making a jump of Olympic gold medal-winning proportions across the River Garry at Soldier's Leap. The NTS visitor centre has displays on the battle and the local natural history. Apr-Oct daily 1000-1730. Free (honesty box; £1 donation advised). Tel. 473233.

The Pitlochry Festival Theatre, Tel. 484626, is across the river from the town centre. It stages a different play every night for 6 nights a week during its season from May to Oct.

Pitlochry in Perthshire is a large and well established holiday town packed with grand houses converted into large and medium sized hotels. The town has all types of accommodation ranging from hotels, B & B's, hostels, and Guesthouses. Check our Visitor Guide to Pitlochry with datas and information on the accommodation in Pitlochry. Below we have our selected list of self-catering cottages in Pitlochry with just a click.

There's plenty of accommodation to choose from. The best hotel in town is the superb Pine Trees Hotel, Strathview Terr, Tel. 472121, This Victorian country house is set in 10 acres of gardens away from the tourist bustle. Its Garden Restaurant has a fine reputation. A few miles north of Pitlochry, in the village of Killiecrankie, is the Killiecrankie Hotel, Tel. 473220, Open Mar-Dec. 10 rooms. It's a quiet, cosy country house hotel which offers quite possibly the very finest food in the area. Another top-class hotel is the Dunfallandy Country House Hotel & Restaurant, Tel. 472648, a mile out of town on the road to Logierait. 8 rooms. This Georgian mansion offers great views, peace and quiet and superb cuisine, no smoking, excellent value.