A few miles west of Kenmore a minor road turns off the A827, which runs along the north bank of the loch, and heads to Fortingall, a tiny village of classic beauty which features on many a calendar. 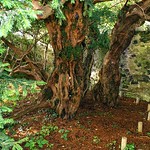 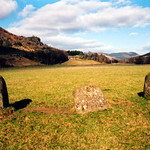 Fortingall is a small village in highland Perthshire situated in the valley  of the River  Lyon. The village is famous for its unique a-z arrangement of cottages around the old inn in the village MacLaren. These  Kirkton Cottages stand out for their simple charm of white painted exteriors and  reed-thatched roofs, which continue to set the theme for the village even  today.

It's little more than a row of thatched cottages which wouldn't even get a mention were it not for two amazing claims. The 5,000-year-old yew tree in the churchyard is claimed to be the oldest living thing in Europe. More astonishing is the claim that this is the birthplace of Pontius Pilate, said to be the son of a Roman officer who was stationed here. Furthermore, it is believed that Pilate returned here to be buried, and a gravestone in the churchyard bears the initials 'PP'. Fortingall is famous for its rich concentrations of prehistoric archaeological sites in Scotland,which include many standing stones and bronze Age tumulus  among others.

There's accommodation in the village at the wonderful, and very popular, Fortingall Hotel, Tel. 01887-830367, next to the churchyard.