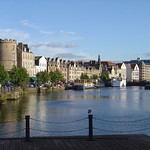 Leith Walk leads from Princes Street down to the port of Leith, which has a distinct flavour all of its own. There has been a settlement here for over 800 years and the harbour has been used commercially since Edward I captured Berwick for England in 1296. Leith became a burgh in its own right in 1833 and only became integrated into the city of Edinburgh in 1920. In its heyday, Leith was Scotland's major port. Ships exported coal, salt, fish, paper, leather and local ale and returned with grain, timber, wine and foreign delicacies, from Northern Europe and as far afield as North America and Australia.

Up until the 1950s, Leith and nearby GrantonGranton supported large deep-sea fishing fleets and were landing thousands of whales every year. Between the two ports the shoreline was lined with shipyards, dry docks, breaking yards and repair yards. When the fishing and shipping trade decanted south, the heart was ripped out of Leith. Much of its old centre was replaced with grim housing schemes and the port area fell into decay. However, the old port's fortunes have changed in recent years and Leith has been turned around. Millions have been spent on restoring many of its fine historic buildings, and it is now one of the best parts of the city for eating and drinking, with scores of fashionable restaurants, bistros and bars. At the same time private developers have been converting old warehouses and office buildings into expensive dockside flats.

The old port still has its rough edges, and you'll need to be careful after dark, but it's worth a visit, especially The Shore, the road which follows the last stretch of the Water of Leith before it reaches the Firth of Forth. In the adjoining streets are some of the most notable buildings to have been given a face-lift, such as the old Customs House on Commercial Street, Trinity House on Kirkgate and the former Town Hall on Constitution Street. Set back from The Shore is Lamb's House, a well-preserved Renaissance house, which was the home of Andro Lamb, the merchant with whom Mary, Queen of Scots spent her first night on her return to Scotland in 1561. It is now used as an old people's day centre.

Leith's main attractions is the Royal Yacht Britannia, which is now moored at its own purpose-built Ocean Terminal, complete with swanky restaurants, bars and shops. The old ship is well worth visiting, despite the rather steep entrance charge, and a genuine and fascinating insight into the lives of the royals. It's like stepping into a 1950s time warp and you'll be amazed (or appalled) at the sheer ordinariness of it all.