ONly discovered in 1984, this is another fascinating neolithic monument that makes this area absolutely remarkable. 15 houses that date back to 3000BC. Walk from the Standing Stones of Stenness. 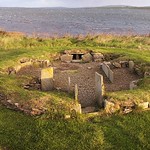 This neolithic settlement only discovered in the last 30 years is further piece of the jigsaw of settlements and sites that form this cluster of Neolithic sites. The 15 structures were occupied for around 400 years between 300-2600BC and at least one seems to have been in continuous occupation throughout the period. After the settlement was abandoned, a chambered cairn of some sort was erected above that has sme similarities with Maes Howe and was probably connected to the Standing Stones of Stenness