The most recent Neolithic site in the area and to some accounts the most important. Dates back to 3500BC and was occupied for 1500 years. In the summer months, archeologists are hard at work. 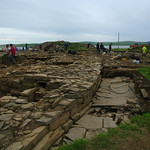 This few square miles of Orkney mainland island offers an unequalled treasure of Neolithic sites in various states of display. This latest is still being uncovered: According to project manager Nick Card, the discoveries are unparalleled in British prehistory, the complexity of finds is changing the "whole vision of what the landscape was 5,000 years ago" and that "it’s of a scale that almost relates to the classical period in the Mediterranean with walled enclosure and walled precincts". Additionally, according to archaeologists in general, the site could be more important than Stonehenge!

You cannot see it all yet, but when combined with the other local sites, this is going to totally change your perception of what life was like and what humans were capable of 4000 years ago!