Guide to Canongate at the foot of Edinburgh's Royal Mile... 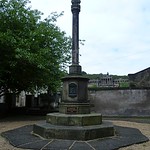 The High Street ends at the junction of St Mary's Street and Jeffrey Street, where the city's eastern gate, Netherbow Port, once stood. The remaining part of the Royal Mile, the Canongate, was a separate burgh for over 700 years, taking its name from the canons (priests) of Holyrood Abbey. As it was near the Palace of Holyroodhouse, the area developed as the court quarter with several fine residences being built there. Though the Canongate went into decline once the court moved to London in the early 17th century, it could still boast an impressive number of aristocrats among its inhabitants, even in the late 18th century.

The most lavish of Canongate's mansions is Moray House, built in 1628 for the daughter of Lord Darnley. Charles I visited here on several occasions and Cromwell used it as his headquarters in 1648. And if that weren't enough historical significance, in 1707 the Treaty of Union was signed in a summerhouse in the garden. More recently, the building has been used as the centre for Moray house College of Education, one of Scotland's leading teacher-training establishments.(Interesting stereo view image and another interesting webpage tracing relationship with Oliver Cromwell)

Opposite Huntly House is the late-16th-century Canongate Tolbooth, the original headquarters of the burgh administration, as well as the courthouse and burgh prison. It now houses The People's Story, a genuinely interesting museum which describes the life and work of the ordinary people of Edinburgh from the late 18th century to the present day. The museum is filled with the sights, sounds and smells of the past and includes, among others, reconstructions of a prison cell, a workshop and a pub. Mon-Sat 1000-1700 and Sun 1400-1700 during the Festival. Free. Tel: 5294057. Next door to the Tolbooth is the Canongate Kirk, built in 1688 to house the congregation expelled from Holyrood Abbey when it was taken over by James VII (II of England) to be used as the chapel for the Order of the Thistle. More interesting, though, is the churchyard, burial place of many famous people. (see panoramic picture) Among the list of notable names is Adam Smith, the father of political economy, who lived in Panmure House nearby, the philosopher Dugald Stewart and Robert Fergusson, arguably Edinburgh's greatest poet who died tragically at the tender age of 23 after being forced into the local madhouse during a bout of depression. Robert Burns, who was greatly inspired by Fergusson's poetry, donated the headstone in 1787, inscribed with his own personal tribute.

The last few yards of the Royal Mile, which forms the approach to the precincts of Holyrood Abbey and Palace, is known as the Abbey Strand. The strange little turreted 16th century building here is known as Queen Mary's Bath House, where, legend has it, Mary, Queen of Scots bathed in sweet white wine. However, it is more likely that it was a summer pavilion or dovecot. Opposite the main gates of the Palace of Holyroodhouse is the site of the new Scottish Parliament building, completed in Atumn 2004. At present the parliament sits in the Church of Scotland headquarters on The Mound.