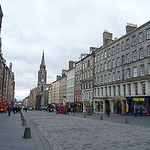 Across George IV Bridge, at the top of the High Street, stands the High Kirk of St Giles, the only parish church of medieval Edinburgh and the home of Presbyterianism, where the firebrand preacher John Knox launched the Scottish Reformation. The Kirk is mistakenly called St Giles Cathedral. This is because Charles I called it so when he introduced bishops into the Church of Scotland and the name stuck, even after Presbyterianism was re-established. The church was given a major face-lift in the 19th century, covering most of its Gothic exterior, but parts of the original medieval building still survive, most notably the late-15th-century crowned tower. The four huge octagonal pillars which support the central tower are thought to date back to the previous Norman church, built in 1120 and razed to the ground by English invaders in the late 14th century. The church has had a colourful past ever since medieval times when the Scottish Parliament met here. It was the launchpad for the Scottish Reformation, as mentioned above, then, around the turn of the 16th century, it was divided up and used as law courts, the town clerk's office, a school and a prison. When the High Kirk returned to its religious function it was partitioned into four different churches, each serving its own congregation, finally being reunified after its Victorian restoration.

One of the most celebrated incidents in the church's history happened in 1637, when an attempt to read from the English prayer book so incensed Jenny Geddes, a humble stallholder, that she launched her stool at the bishop's head, shouting (according to tradition): "False thief, will ye no say mass about my lug?, which roughly translates as "stop saying mass or you're in big trouble, mate!". A plaque marks the spot where the stool landed and recounts the ensuing riot. Such disturbances led to the National Covenenant of 1638, establishing the Presbyterian Church of Scotland in defiance of Charles I. This in turn led to Civil War, during which many Covenanters were imprisoned in the church. Two of the most famous figures of the war, the royalist Marquis of Montrose and the convenanting Marquis of Argyll, were both executed outside the church and now lie entombed within its walls, facing each other from opposite aisles.

There have been many additions to the High Kirk since its restoration. One of these is the very beautiful Thistle Chapel, the Chapel of the Most Ancient and Most Noble Order of the Thistle (Scotland's foremost order of chivalry). It was designed by Sir Robert Lorimer and built in 1911. The elaborate ornamentation and fine carvings are exquisite (look out for the angel playing the bagpipes). There are also several Pre-Raphaelite stained-glass windows in the church, and above the west door is a memorial window to Robert Burns, rather surprising given that the great bard was hardly an upholder of Presbyterian values. There's a good café in the church crypt. (Easter-Sep Mon-Fri 0900-1900, Sat 0900-1700, Sun 1300-1700; Oct-Easter Mon-Sat 0900-1700, Sun 1300-1700. Free (donations welcome). Tel: +44 131 2259442.)

Outside the High Kirk of St Giles, on Parliament Square, is an imposing equestrian statue of King Charles II and, nearby, a flat stone bearing the legend 'I.K. 1572' marks the reputed burial place of John Knox. In front of the west door of the church is the site of the city Tolbooth, demolished in 1817. The Tolbooth entrance is marked by a heart-shaped pattern in the cobblestones, known as the Heart of Midlothian, and made famous by Sir Walter Scott in his eponymous novel. Should you see passers-by spitting on it, it's not a sign of disrespect, but supposed to bring good luck. Behind the church is the Mercat Cross, where public proclamations are traditionally read. The present cross is a replica, gifted to the city by the then prime-minister, W.E. Gladstone.

The rest of Parliament Square is formed by the Law Courts, Parliament House and the Signet Library. The Law Courts, where Sir Walter Scott practised as an advocate, were originally planned by Robert Adam (1728-1792), who contributed so much to the grace and elegance of the New Town, but due to lack of funds were built to designs by Robert Reid (1776-1856). On the west side of the square is the Signet Library, centre for the Society of Her Majesty's Writers to the Signet, an organization that originated from the 15th-century Keepers of the King's Seal, or signet. It boasts one of the finest neoclassical interiors in the city, but unfortunately can only seen by prior written application, except on very occasional open days. Parliament House, facing the south side of St Giles, was the meeting place of the Scots Parliament between 1639 and 1707. It is now used by the city's lawyers in between court sittings, but is readily accessible during the week. The most notable feature is the magnificent Parliament Hall with its wonderful 17th century hammerbeam roof.

On the opposite side of the High Street is Edinburgh City Chambers, designed by John Adam (brother of Robert) and built in 1761 as the Royal Exchange. However, it proved not to the liking of the city's traders, who preferred to conduct their business in the street, so in the early 19th century it became the headquarters of the city council. Beneath the city chambers is Mary King's Close, closed off for many years after the 1645 plague and now open to guided tours (see page ). A little further down is Anchor Close, where the first editions of Encyclopaedia Britannica and of Robert Burns' poems were printed at the printing works of William Smellie.

At the junction of the High Street and South Bridge is the Tron Kirk, founded in 1637, and now more famously known as a favourite Hogmanay rendezvous. The church was named after the Tron, a public weighing beam which stood close by and which was a popular place for merchants to sell their wares. If they were found guilty of selling short measures, they were nailed to the Tron by their ears. The church was built to accommodate the Presbyterian congregation ejected from St Giles during the latter's brief period as a cathedral and continued in use until it was closed in 1952. It now houses the Old Town tourist information centre, and recent excavations have revealed sections of Marlin's Wynd, which ran from the High Street down to the Cowgate.

Past the junction of the North and South Bridges, on the north side of the High Street, is Carruber's Close, where Sir James Simpson, the discoverer of chloroform, ran a medical dispensary in the 1860s. Above the entrance to Paisley Close is the bust of a boy saved from beneath the rubble when the tenement collapsed in 1861, killing 35 inhabitants, an incident which helped to hasten the much-needed improvement of the Old Town's buildings.

In Chalmers Close, just to the west, is Trinity Apse, a sad reminder of the Holy Trinity Church, one of Edinburgh's finest pieces of Gothic architecture, demolished in 1848 to make room for the railway line to Waverley. The stones from the original were carefully numbered for rebuilding on the present site, but pilfering depleted the stock so much that only the apse could be reconstructed, in 1852, on the present site. It is now a Brass Rubbing Centre, where you can make your own rubbings from the materials supplied. (Apr-Sep Mon-Sat 1000-1700; also Sun 1200-1700 during the Festival only. Free. Tel: 0131 5564364).

On the opposite side of the High Street, in Hyndford's Close, is the Museum of Childhood, which is full of kids screaming with excitement at the vast collection of toys, dolls, games and books, and nostalgic adults yelling "I used to have one of those!". There's even a video history of the various Gerry Anderson TV puppet series such as Thunderbirds and Fireball XL5. The museum also covers the serious issues of childhood, such as health and education, but that doesn't spoil the sheer fun of the place. (Mon-Sat 1000-1700 and Sun 1400-1700 during the Festival, free, Tel: 0131 5294142).

Almost directly opposite is the early 16th-century Moubray House, thought to be the oldest inhabited building in Edinburgh, but closed to the public. This is where Daniel Defoe was based when he came to Edinburgh in 1706 as an English agent to help negotiate the Act of Union. Next door is John Knox's House, one of the Royal Mile's most distinctive buildings and dating from the late 15th and 16th centuries. It's not known for sure whether or not the Calvinist preacher actually lived here, but the house did belong to James Mossman, goldsmith to Mary, Queen of Scots. Today, the house is a rather austere museum devoted to the life and career of John Knox. (Mon-Sat 1000-1700 (in Aug also Sun 1200-1700). £2.25, £1.75 concession, £0.75 child. Tel: +44 131 556 9579).  It also houses the rather wonderful Scottish Storytelling Centre which also features a cafe and giftshop (Opening times 10am-6pm Monday to Saturdday and Sundays in July and August).