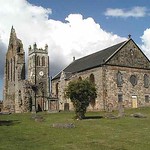 Kilwinning lies a few miles inland from Ardrossan on the River Garnock. Its main claim to fame is as the home to Freemasonry in Scotland:  Mother Lodge Kilwinning (No 0) was founded in 1107, at the same time as the Abbey, of which the few remains have been incorporated into the present Parish Church.

In the 20th Century Kilwinning was largely industrial with a large ICI works to the west of the town and its large railway junction leds to it nickname.

There is a train station with direct links to Glasgow as well as buses.