Iconic image of Edinburgh and one of the most perfectly located castles on the planet. 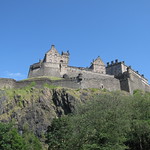 Edinburgh Castle has to be one of the most famous castles in the world and not surprising when you see it and how it dominates the landscape of Edinburgh. The castle is located at the top of the Royal Mile on a large volcanic rock.It bears over you when your shopping on Princes Street are when you sunbathing in the Princes Street gardens.What a back drop the castle makes on Hogmanay or at the end of the Edinburgh festival when all the fireworks go off.Edinburgh Castle Opening TimesOpen all year.Summer 1 April to 31 October Monday to Sunday 9.30am to 6.00pm. Last entry at 5.15 pm.Winter 1 November to 31 March Monday to Sunday 9.30am to 5.00pm. Last entry at 4.15 pm.Christmas and New Year Period Closed 25 and 26 December. Open on 1 January and 2 January - please call for opening hours.Museums at the Castle: The times for independent museums may vary. Please telephone to check opening times prior to visit.Length of Visit: 2 hoursWhat to see and do in the castleA variety of architectural design and styles shows of it's changing history of war and royalty.Things you don't want to miss out on in the castle include:St Margaret's Chapel - Edinburgh's oldest building which dates from the 1100sCrown Square - the principal courtyard which was developed in the 15th centuryThe Great Hall with its impressive hammerbeam roof built by James IVThe Half Moon Battery created in the late 16th centuryThe Scottish National War Memorial added after the First World War.Prisoners of War exhibition: Edinburgh Castle was a prison for sailors from many countries in the 18th and 19th centuries, including crewmen who sailed with John Paul Jones, founder of the American Navy. Their graffiti, handmade ships and other items are on display in the Prisoners of War exhibition.Other attractions include:The Honours of the Kingdom exhibition - tells the story of Scotland's Crown Jewels saved from Cromwell to become some of the oldest surviving regalia in Europe.The famous Stone of Destiny - taken to Westminster Abbey in 1296 and returned to Scotland 700 years later.Listen out for or watch the One O'Clock Gun and see a fascinating display on the history of time guns and timekeeping. The giant medieval siege cannon Mons Meg once again standing proudly on the castle rampartsThe magnificent Laich HallThe National War Museum of Scotland.Website & Phone Numbers for Edinburgh CastleWebsite: Official Website for Edinburgh CastlePlanning Your Visit: Useful Web page for times and booking (includes link to online booking which saves on queueing time in the busy summer period)Telephone Numbers: +44 (0) 131 225 9846 for general queries. +44 (0) 131 668 8081 for booking queries