Loch Ness is world famous for the wrong reasons: the mythical watery monster than has been subject to repeated scientific investigations without success. Its fame ignores the real attractions of this huge lake framed by mountains and castles that cuts the highlands in two. 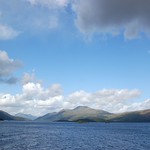 Many visitors to Scotland set out to see Loch Ness as it is surely one of the most famous lakes in the world although for the wrong reason. Fortunately, they are rarely disappointed as it is a truly beautiful place with a magical quality early in the morning or late in the afternoon.

Loch Ness is the second largest Scottish loch by surface area at 56.4 km2 (21.8 sq mi) after Loch Lomond, but due to its great depth, it is the largest by volume. It is also one of the longest lochs extending for approximately 37 km/23 miles. Its deepest point is 230 m (755 ft) which is deeper than the height of London's BT Tower at 189 m (620 ft) and deeper than any other Scottish loch except Loch Morar. In fact, it contains more fresh water than all the lakes in England and Wales combined,[2] and is the largest body of water on the Great Glen Fault, which runs from Inverness in the north to Fort William in the south.

There are numerous tours that include Loch Ness in their itinerary (see our Scottish Tours page) and there is accommodation around the Loch or in Inverness.

The loch is scenic in its own right, with rugged hills rising steeply from its wooded shores, but visitors don't come here for the views. They come every year, in their hundreds of thousands, to stare across the dark, cold waters in search of its legendary inhabitant, the Loch Ness Monster. A huge tourist trade has grown up around 'Nessie', as the monster is affectionately known, and every summer the main A82 which runs along its western shore is jam packed with bus-loads of eager monster-hunters, binoculars trained on the loch surface, desperate for one glimpse of the elusive beast.

For a free online guide to walks in this area, visit Loch Ness & Glen Affric walks.

Apart from walking, the best way to see the loch is on a cruise from Inverness. There are also boat trips from Drumnadrochit and Fort Augustus. Most of the tourist traffic uses the congested A82, which offers few decent views of the loch.

By far the best views of the loch are from the quiet and picturesque B862/852 which runs along its eastern shore, from Fort Augustus up to Inverness. It's possible to make a complete circuit of the loch, which is best done in an anti-clockwise direction heading south from Inverness on the A82, but you'll need your own transport (or take a tour), as there are no buses between Fort Augustus and Foyers.