Stretching north from the Mull of Kintyre almost to Glencoe and east to the shores of Loch Lomond, the region of Argyll marks the transition from Lowland to Highland. It's a region of great variety, containing all the ingredients of the classic Scottish holiday: peaceful wooded glens, heather-clad mountains full of deer, lovely wee fishing ports such as Campbeltown on the Mull of Kintyre, romantic castles and beautiful lochs. 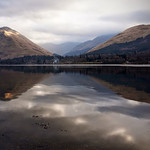 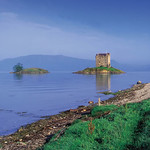 Argyll also has its own particular attractions in the shape of its numerous prehistoric sites. Much of the region was once part of the ancient Kingdom of Dalriada, established by the Irish Celts (known as the Scotti, hence Scotland) who settled here in the fifth century. Their capital was at Dunadd, near Lochgilphead, from where they gained ascendancy over the native Picts. Argyll has since been ruled by Norse invaders, then by Somerled, whose successors, the powerful MacDonalds, Lords of the Isles, were in turn dislodged by the Campbells, allies of Robert the Bruce. They became the Dukes of Argyll, and even today are still one of the largest landowners in the region.