Visitor's guide to Port Appin in Argyll including history, sightseeing, tips and accommodation...

The road runs around Loch Creran and enters the district of Appin, made famous in Robert Louis Stevenson's Kidnapped, which was based on the 'Appin Murder' of 1752. A road turns southwest off the main Fort William road to Port Appin, on the western tip of the peninsula, the departure point for the passenger ferry to Lismore. 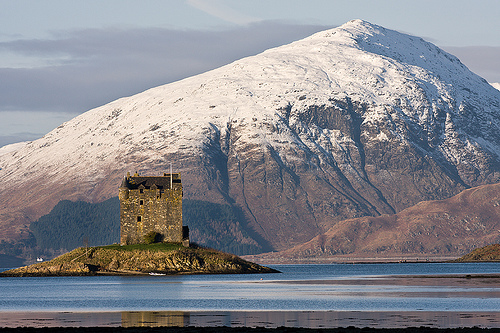 To the north of Port Appin is the irresistibly photogenic Castle Stalker. Standing on its own tiny island with a background of islands and hills, it's probably second only to the famous Eilean Donan in its portrayal of Scotland's romantic image. It was built in the 16th century by the Stewarts of Appin before falling into Campbell hands after the ill-fated 1745 rebellion. The current owners open it to the public for a limited period in July and August. Check opening times at the tourist office in Oban.

At Lettershuna, just beyond Port Appin, is the Linnhe Marine Watersports Centre, where you can hire motor boats, sailing dinghies or windsurfing boards, take sailing or windsurfing lessons, or try water-skiing, pony trekking or even clay pigeon shooting. May-Sep 0900-1800. Tel. 01631 730401.

There are a couple of hotels in this attractive little fishing village, the best of which is the superb Airds Hotel, Tel. 730236, Fax. 730535. 12 rooms. This classy little roadside hotel boasts one of the very best restaurants in the whole country and is recommended in all the best guide books. There's also the Pierhouse Hotel, Tel. 730302, Fax. 730400. Sitting right by the tiny pier, this cosy little hotel has a deserved reputation for excellent, moderately priced local seafood. If your budget doesn't stretch that far, then there's the Fasgadh Guest House, Tel. 730374.

Self Catering Cottages in Appin