Our Isle of Seil visitor guide provides information on accommodation on the Isle of Seil, travel and things to see and do there. 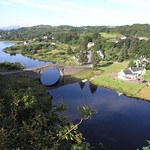 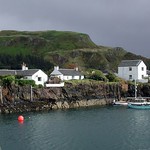 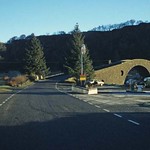 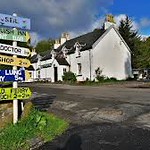 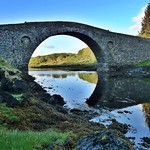 Eight miles south of Oban the B884 turns west off the A816 to the tiny Slate Islands, so called because in the mid-19th century, the island's slate quarries exported millions of roofing slates every year. The quarrying industry has long since gone, leaving behind dilapidated old buildings as well as pretty little villages of whitewashed cottages built for the slate workers.

The most northerly of the Slate Islands is Seil, which is reached from the mainland across the impressive Clachan Bridge, better known as the 'Bridge over the Atlantic', built in 1792 (and designed by Thomas Telford), with its elegant, high arch to allow ships to pass beneath.

Beside the bridge is an old inn, Tigh an Truish, or 'House of the Trousers', where islanders would have to swap kilt for trousers in order to conform to the post-1745 ban on the wearing of Highland dress.

The Tigh an Truish Inn near the bridge offers lunchtime and evening menus which include seafood caught by local fishermen. Tel. 300242.

Travel Directions to Isle of Seil

A Postbus service runs from Oban train station to Clachan Seil, Balvicar, Ellenbeich and North Cuan on Seil. There's also a circular postbus service on Luing, from South Cuan to Cullipool and Toberonochy. Check times at Oban tourist office. Fares for both routes are £1 (£0.50 for children).

A passenger ferry sails from Ellanbeich on Seil to Easdale, making the 5-min trip at regular intervals between 0745 and 1900 Mon-Sat (between 0930 and 1500 on Sun), partly to schedule, partly on request. Check times at Oban tourist office.

Two miles south, at Balvicar, the road turns right and climbs up and over to the main village of Ellanbeich, an attractive wee place with rows of white cottages around the harbour. This was once a tiny island itself until the intensive slate quarrying succeeded in silting up the narrow sea channel. The village is also, rather confusingly, known by the same name as the nearby island of Easdale, so renowned was the latter for its slate deposits. Another road runs south from Balvicar to North Cuan, from where the car ferry sails across the treacherous Cuan Sound to Luing.

There's B&B accommodation on Seil, at Mutiara, Tel. 300241, open May-Nov., and some good self catering cottages.