Charming bay and anchorage near Taynault in Argyll on Loch Etive. The area has interesting historical connections with the local furnace. Good walk along the shoreline.

The bay is a crescent cut out from Loch Etive and facing North, of considerable historical interest nearby is Bonawe Furnace which has been restored and is now maintained by Historic Scotland. You can walk from Taynault to the bay and walka long the waterside.

This was a charcoal-fired blast-furnace built in 1753, which produced until 1876. The canon balls used by Nelson's navy at the Battle of Trafalgar were forged here. The first monument to the battle and Nelson's death is a 'converted' standing stone in Taynuilt, the nearby village.

The charcoal for smelting came from the local woods, there was plenty of water for the waterwheel to run the bellows, and the iron ore was shipped up from Cumbria. Wandering around the old buildings, now peaceful and quiet and the lumpy ground which must be covering more ruins and slag heaps, it is difficult to imagine that this was once a hive of activity - lots of very dirty men working very hard. Apparently 600 people worked here and around in the woods as charcoal burners. "Pevsner" aptly remarks on the 'monumental quietness' of the buildings, 'more ecclesiastical than industrial'. It is very well sign posted and certainly worth wandering around.

Kelly's quay is the long turf-topped pier which was built for the ships to bring in the raw materials and take out the pig iron and, during the Napoleonic wars, canon balls. 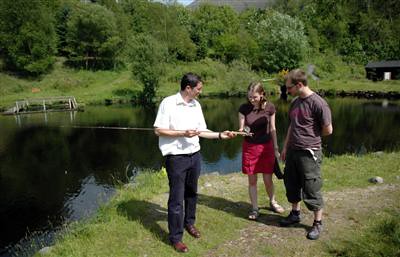