Nestled deep in the stunning landscapes of the Scottish Highlands you'll discover the home of Caorunn. Premium and small batch, the handcrafted gin is made with the care and passion you would expect from our renowned Scottish spirit making expertise. 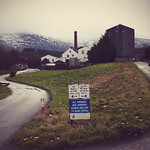 Balmenach distillery is nestled at the bottom of the Haughs of Cromdale in the Spey valley. It was in these hills on the last day of April 1690 that an army of jacobite soldiers were ambushed by dragoon guards. As the jacobite forces were ambushed during their sleep many were slain and the remaining fled nearly naked; this defeat effectively ended the jacobite rising in the highlands.

In the early 1800's three brothers crossed these hills from Tomintoul and set up a farm. One of these brothers was a James McGregor who also set up an illicit still on the site. Shortly after the licensing act was introduced, James McGregor obtained a license for his distillery formally establishing it in 1824.

The distillery was owned and operated by the McGregor family until it was sold in 1922 to a company that would become DCL. In 1993 UDV took the decision to mothball Balmenach, it lay silent until 1998 when Inver House Distillers bought the distillery making it the company's fifth and largest distillery. The first distillate of Balmenach for 5 years was then produced in March that year, and stored in casks in one of the three dunnage warehouses on the site.

In common with Inver House Distillers' other plants, the traditional machinery and methods are still used to this day. This includes a cast iron mash tun mashing slightly more than 8 tonnes every 7.5 hours. The wash is fermented in six Douglas fir washbacks for a minimum of 50 hours before it is sent to the stillhouse for distillation.

The stillhouse houses three wash stills and three spirit stills capable of producing over 2 million litres of whisky a year. This sprit travels slowly through 90 metres of copper tube coils in large tubs of cold water, known as "worm tubs", before it enters one of the two spirit safes in the stillhouse. From there it is transferred to one of two spirit vats. The spirit is finally matured in oak casks for many years until the spirit is deemed at its best for bottling.

They not only make whisky but also a very fine gin called Caorunn. Caorunn is a small batch, quadruple-distilled Scottish Gin personally crafted by one man – Simon Buley. Using only the finest pure grain spirit, natural Scottish Water and 11 botanical gin ingredients, he personally crafts each and every bottle of Caorunn. Each personally crafted bottle of Caorunn gin begins with the highest quality grain spirit and locally foraged Celtic botanicals. In 1,000 litre batches, the spirit is vaporised through the world's only working Copper Berry Chamber. Many of the ingredients are actuallt foraged

Seasonal, visit by appointment only, please email This email address is being protected from spambots. You need JavaScript enabled to view it.