Set in the beautiful Perthshire countryside at the gateway to the Highlands, we believe our Distillery is a real gem as it continues to operate in the traditional way, without modern day computer technology, giving visitors a real insight to the whisky distillation process. 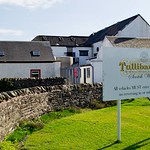 Small distillery that draws its water from the Ochil Hills nearby. There is historical record of a brewery on the site back in the C15th which received a Royal Charter. The brewery became a distillery after world war 2 in 1947.

In 2011, the distillery became independent again and is distilling.

You can visit for tours: see details below.

Distillery tours and tastings are always led by one of our enthusiastic and knowledgeable guides and are run frequently throughout the day. If you have a large party of people or wish to take a tour at a specific time and date, please contact us in advance so we are able to do our best to accommodate you and let us make your experience as enjoyable as possible.