The narrow uppermost part of the Royal Mile nearest the castle is known as Castlehill. 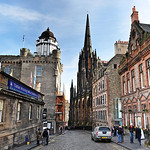 Just below the Castle Esplanade is an iron fountain which marks the spot where more than 300 Edinburgh women were burned as witches between 1479 and 1722. Behind the fountain rises Ramsay Gardens, a distinctive and picturesque late 19th-century apartment block which grew around the octagonal Goose Pie House, home of 18th-century poet Allan Ramsay, author of The Gentle Shepherd. These early apartments were designed by Sir Patrick Geddes, a pioneer of architectural conservation and town planning, who created them in an attempt to regenerate the Old Town.

At the corner of Castlehill and Castle Wynd is Cannonball House, which takes its name from a cannonball embedded in the west wall. According to legend, the cannonball was fired from the Castle during the '45 rebellion, but in fact it marks the high-water level of the city's first piped water supply in 1681. Next door is the Scotch Whisky Heritage Centre, 354 Castlehill, where you can find out everything you ever wanted to know about Scotland's national drink. The best part is the bond bar, where you can sample some of the vast range of malt whiskies on offer before buying a bottle in the gift shop. Daily Jun-Sep 0930-1800, Oct-May 1000-1730. £5.50, £2.75 children, £3.85 concession. Tel: 2200441, Across the street is the Edinburgh Old Town Weaving Company, which has a real working mill where you can see tartan being woven and a small exhibition. Daily 0900-1730. Free entry to mill and a small charge for the exhibition. Tel: 2261555.

A few doors further down, on the corner of Ramsay Lane, is the Camera Obscura and World of Illusions which has been one of the capital's top tourist attractions since a camera obscura was set up in the hexagonal tower by optician, Maria Theresa Short, in 1854. The device consists of a giant camera which sweeps around the city and beams the live images onto a tabletop screen, accompanied by a running commentary of the city's past. Spy on passers-by in the street and pick them up on your hand! Amazing optical illusions with endless hands-on fun. Enjoy stunning holograms, spectacular 360° rooftop panoramas with free telescopes and live city viewcams. Current admission prices are as follows: Adult £6.50 Student with ID £5.20 Senior £5.20 Child £4.20.There's also an exhibition of photographs taken with a variety of home-made pinhole cameras and the rooftop viewing terrace offers fantastic views of the city. Daily Apr-Oct 0930-1800 (later in Jul/Aug), Nov-Mar 1000-1700. Tel: 2263709.

A little further down, on the opposite side of the street is theTolbooth Kirk, whose distinctive spire is the highest in the city and a distinctive feature of the Edinburgh skyline. The building was originally intended to house the General Assembly of the Church of Scotland, but they moved across the street in the 1850s. The Tolbooth Kirk was where the city's Gaelic speakers used to worship, until it was closed in 1981. It has recently been converted into The Hub, which houses the ticket centre for Edinburgh International Festival. The Hub also stages various events and is home to the excellent Café Hub. Opposite is the neo-Gothic New College and Assembly Hall. Built in 1859, it is the meeting place of the annual General Assembly of the Church of Scotland and is also used during the Festival to stage major drama productions.