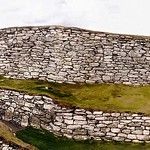 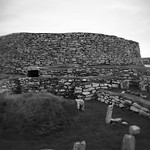 The site was first inhabited around 700-600 BC. Further structures superseded the original until the present Broch was constructed in the first century AD. A later wheelhouse was added after the Broch before the site was abandoned.

The broch is well preserved mainly thanks to restoration work which has tidied up the site and evened out the broch walls. The site is nothing like as dramatic as many Shetland monuments but the quality of the site makes it easy to read and interpret.