Island off Shetland facing Sandwick that is home to the famous Mousa Broch. Best visited on a boat trip. The whole island is an RSPB reserve. 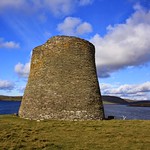 Mousa is first mentioned in Icelandic chronicles in the 9th century although we know from the Broch that the island must have been inhabuited for 1000 years before and more and must have been sufficiently important or prosperous that the inhabitants would have constructred the great tower. There is evidence that Mousa has been inhabited since Neolithic times.

The island is now entirely uninhabited by humans and is now an important breeding site for a number of important indigenous species. The island was inhabited until the mid 1850s when it was privately owned and you can still see evidence of the last inhabitants at Knowe House.

Most people visit today to see the Broch and walk around the reserve.