Visit for the evening fishing market or if the weather is sunny, make your Oldshoremore and its lovely sandy beach for a swim. Or head to Sandwood Bay and the West Coast's most beautiful beach. 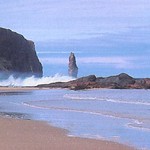 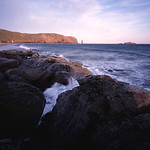 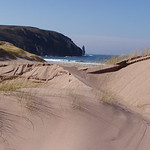 The road north from Scourie passes Laxford Bridge, where it meets the A838 running southeast to Lairg. The A838 also runs north to Durness, on the north coast (see below). At Rhiconich, the B801 branches northwest to Kinlochbervie, a small village with a very big fish market. This is one of the west coast's major fishing ports, and huge container lorries thunder along the narrow single-track roads carrying frozen fish and seafood to all corners of Europe. It's worth heading down to the fish market in the evenings to see the day's catch being landed and sold.

A few miles beyond Kinlochbervie is Oldshoremore, a tiny crofters' village scattered around a stunning white beach, and a great place to swim. The less hardy can instead explore the hidden rocky coves nearby.

At the end of the road is Blairmore, from where a footpath leads to Sandwood Bay, the most stunning and beautiful beach on the west coast. It's a long walk, but because of its isolation you'll probably have this glorious mile-long stretch of white sand all to yourself. The beach is flanked at one end by a spectacular rock pinnacle and is said to be haunted by the ghost of an ancient shipwrecked mariner. Allow three hours for the walk there and back, plus time at the beach. You could take a tent and watch the sunset. Sandwood Bay can also be reached from Cape Wrath, a day's hike to the north.

A Postbus leaves Kinlochbervie harbour at 0900 and goes to Scourie (35 mins) and on to Lairg (1 hr 50 mins) from where there are connections to Inverness. The same postbus returns from Lairg at 1245, arrives in Kinlochbervie at 1448, then continues to Durness (35 mins).

The Kinlochbervie Hotel is situated in one of the most stunning locations on the North-west coast of Scotland, 10 rooms, and local food in the bistro. The hotel overlooks the busy fishing harbour of Kinlochbervie with wide open seas, surrounding majestic hills and unforgettable sunsets. More details about Kinlochbervie Hotel