The highest village in the Highlands and close to Lecht skiing with excellent walking nearby. The village is in the Glenlivet Estate. 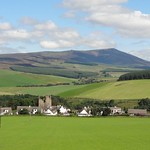 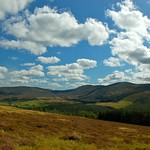 The village was laid out in 1775 by the Duke of Gordon in a specific grid pattern. The village used to house around 1720 inhabitants but the numbers have fallen to around 350 in the last census.

The film "one Last chance" was filmed in the village in 2004.

The Gordon Arms Hotel saw significant improvement in the 1990s when it was lavished with funds from the media styled Lord Tony Williams. 'Lord' Williams spent at least £1 million on improving the hotel, and invested yet more money in other projects within the village. The wealth itself proved illusory: rather than a wealthy peer of the realmWilliams was a former Deputy Director of Finance in the Metropolitan Police and had used his talents to defraud them of £4.5 million. He was later sentenced to seven years in prison. After his arrest a 10 metre tall fibreglass Zulu was discovered in the hotel beer cellar – its purpose was never determined or explained.

There are tea rooms at the Old Fire Station in the centre of town (facebook link) and restaurant at the Clockhouse Restaurant (01907 580378).

There is also a pub, The Gordon's Public House (link) at the Balfour Hotel which is a boutique style hotel in the centre of the village. The bar serves whiskies and good craft beers.

The whisky Castle also has a cafe

There is a village shop and post office as well a small craft shop called the A'anside Studio (now closed). For whisky lovers, there is The Whisky Castle which also has an online shop - see here. The shop also has a cafe. The shop features something like 500 malts!

There is a bus service between Tomintoul and Grantow-on-Spey. The return service will operate morning and afternoon on a Wednesday, with an adult fare of £5 for the 13-mile one-way journey. A day return fare will be £6.50.