Stone Circle dating to 2nd and 3rd millenia BC. Just off the road and easy to visit whilst travelling between Aberfeldy and Kenmore. 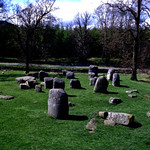 The complex stone circle at Croft Moraig was excavated in 1965 on behalf of the DoE. It was found to have three phases of construction, the first being a penannular setting of timber uprights. This was replaced by an oval of 8 standing stones, about 25' x 20', and probably by a stone bank 55' in diameter with a flat cup marked stone on the axes of the phase I and II monuments. The third phase consisted of a circle of 12 standing stones about 40' in diameter, with an entrance in the SE marked by two massive outlying stones with two adjacent inhumation graves.  The only dating evidence was provided by sherds of Neolithic ware from the make-up soil of phase II, with a likely date at the turn of the 3rd and 2nd millenia BC.  S Piggott 1966; S Piggott and D D A Simpson 1971  The most complete stone circle of its type in Scotland. A variant of the recumbent stone circle, overlying an earlier timber structure, this site displays the typical cup marked, recumbent stone, graded circle-stones, SSW orientation, quartz pebbles and continuous outer stoney bank.  F R Coles 1910; H A W Burl 1973

beside a farm midway between Aberfeldy and Kenmore