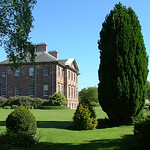 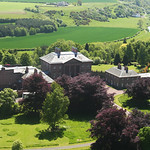 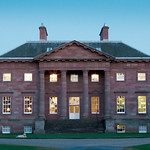 Paxton House, completed in 1763, is a neo-Palladian masterpiece designed by the architect John Adam, assisted by James Adam, brothers of the perhaps more famous Robert Adam, who would later be commissioned to decorate part of the interior.

The house was extended in the early nineteenth century by the Edinburgh architect Robert Reid, who added a library and magnificent picture gallery.

The house sits on elevated ground overlooking the River Tweed, and is set amidst eighty acres of garden and parkland, a haven for birds and animals.

The interior of the house boasts original plasterwork, wallpapers and magnificent furniture by Chippendale and William Trotter, still in their original room settings. In addition, there are paintings by Reynolds, Raeburn, Naysmith and others, as well as pictures, books, costumes and antiques collected during the Grand Tour undertaken by Patrick Home.

The Picture Gallery also houses a collection of over seventy paintings dating from the late eighteenth and early nineteenth centuries, which have been loaned by the National Galleries of Scotland. Visitors to the house will also have the opportunity to view the recently restored Georgian kitchen, where occasional cookery demonstrations are staged.

Open daily from the 1st of April to the 31st October.

Guided Tours of the House

Tours last approx 1 hour and leave from the waiting room adjacent to the courtyard.
Please book in at reception, last tour is 4pm (April & October 3.30pm)

Paxton House is signposted 3 miles from the A1 Berwick upon Tweed bypass on the B6461 and from the A697 junction with the B6461.

Berwick lies on the British Rail east coast mainline which is 4 miles from Paxton House.

The No 32 ‘Paxton House Bus’ from Berwick operates daily except Sunday.