Visitor's guide to Elie in the eastern part of Fife includes links to places around the area, accommodation and other useful information. 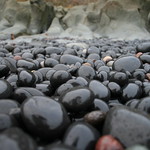 Heading east from Largo, the coastal villages are Elie and Earlsferry, which are really two halves of the same place. This is one of Fife's most popular resorts, with a mile of lovely sandy beaches, and is very popular with sailors and windsurfers. There are also two golf courses – a nine-hole and an 18-hole. There is an exclusive air about Elie, which is only enhanced by the tale that, at one time, fish and chips were banned from the town! Like its neighbours, though, it shares the distinctive Dutch-influenced architecture. The Lady's Tower, a short walk from the harbour, recalls a more aristocratic past. The tower was built as a bathing box for Lady Janet Anstruther, a noted beauty of the 18th century. The whole town knew when Lady Janet was bathing, for she sent a bellman round the streets to warn the inhabitants to stay away.

Elie's westerly neighbour is the much older burgh of Earlsferry. There are three caves in the rock face at Kincraig Point, the headland at the far end of a broad sandy beach: the Deil's (Devil's) Cave; Doo's (dove's) Cave; and the spectacular MacDuff's Cave, where the Thane (Earl) of Fife is said to have hidden from Shakespeare's Macbeth, until fishermen rowed him across the Forth to safety. Hence the town's name. By the harbour, Tel. 330962, offer windsurfing, sailing, water-skiing and canoe hire and instruction and also hire out mountain bikes (around £9 per day).

For tasty bar meals and a good pint try the Ship Inn, down by Elie Harbour. The best place to eat is the highly acclaimed Bouquet Garni, on the High St, Tel. 330374. It's open for lunch and 1900-2100; closed Sun. No smoking. Mid-range.